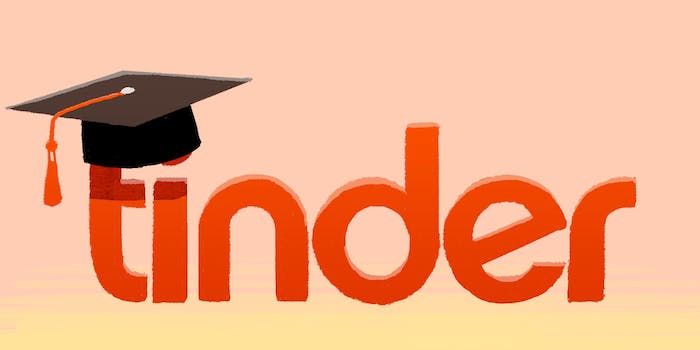 Will Tinder’s update change its reputation as a hookup app?

'We met on Tinder' may not be such a ridiculous statement after all.

Back in August, Vanity Fair writer Nancy Jo Sales declared that Tinder had kicked off “the dawn of the dating apocalypse.” But just three months later, the app has introduced new “smart” profiles in an effort to rehabilitate its image as just a hookup app—and a new algorithm to help foster legitimate relationships. Will it work?

The new profiles include a user’s education and occupation info. A post on Tinder’s blog on Wednesday revealed these were user’s “most-requested” features, and notes that it “allows users to make more informed choices when deciding to swipe left, right, or even up—while also providing great conversation starters.”

More mysterious is the way that they’ve rejiggered the algorithm, which will supposedly lead to a higher success rate: “We’ve made some big changes under the hood to improve the way that Tinder selects the profiles that are shown to you,” the blog post reads. “While these algorithm improvements are all behind the scenes, you’ll notice the difference; these updates have led to a significant increase in matches.”

Is this a new dawn for the app, famous for right swipes and one-night stands?

Carmelia Ray, a Toronto-based online dating expert and matchmaker, called the new features a “very smart move on Tinder’s part” and “an attempt to show the world that they’re not just a hookup app.”

Ray sees the inclusion of education and occupation as ways of competing with other popular dating apps like Hinge and Bumble which include that information as well. If you’re a white-collar, educated woman, she told the Daily Dot via phone, you’re likely looking for a white-collar, educated man, and this additional info removes some of the guess work. (Particularly about whether or not the person you’re going out with can afford a decent date.)

Knowing where someone went to school and where they work also eases that painfully awkward process of initiating a new conversation on Tinder, Laurie Davis, the founder of online dating advice site eFlirt, told the Daily Dot in an email. “Tinder users historically don’t type much information in their profile, so beginning a conversation is challenging. When someone shares the same alma mater or works in a similar industry, there is a more instant opening to connection.”

And Tinder is making sure that commonality like this is listed front and center. The new update will highlight pertinent information on the home screen, indicating things like “You both went to Ringling Bros. and Barnum & Bailey Clown College” or “Jill Biden is your mutual friend.”

But one potential concern is safety. When users updated the app on Wednesday, their education and job information was automatically loaded in. And for those who don’t live and breathe on the Internet, it took some people hours to realize that their personal information had been shared with the vast Tinder community.

I updated @Tinder earlier & had no idea my info was visible to everyone all day. It's fixed, but we should have to opt in, not opt out.

Davis believes this will be a particular concern for female users. “I expect that many women will be concerned about their safety when their job and education are listed in their profile,” she said. “Other apps like Hinge, Bumble, and The League list these details, but they also are smaller communities than Tinder and are often curated environments. Having your job and education listed within a huge community like Tinder could start to feel like anyone has access to your life.”

But Davis does recognize that opting out of sharing this information could lead to fewer matches, and in the end, online dating is a numbers game. Ray, for her part, doesn’t see the update as dangerous in any way.

“I think all of that information is better for both sides,” she said. “I can’t see a downside to that. It’s up to you as a responsible person to protect your information.”

Just like on any social network, she says, it’s up to the individual how much they’d like to reveal about themselves. And she encourages her clients to use Tinder as a way to practice social skills and just get out there.

Whether or not Tinder’s updates will truly lead to “smart” matches remains to be seen. But perhaps soon “we met on Tinder” will be a phrase you read in the New York Times Vows column.