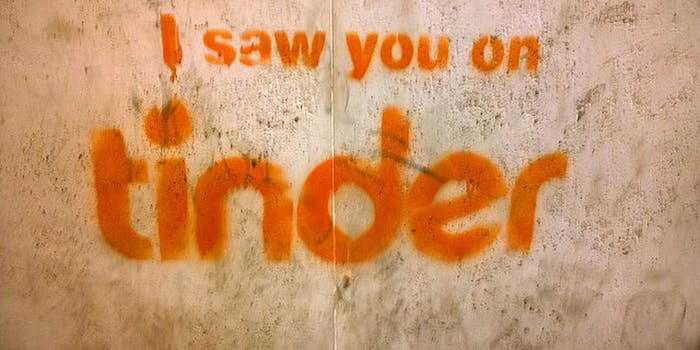 You can now find an STI testing locator through Tinder

It's a major step for safer sex.

Last fall, Tinder came under fire from the AIDS Healthcare Foundation (AHF) in a billboard implying that the popular dating app has played a role in the rise of sexually-transmitted infections.

Looks like The Internet has finally run out of cutesy names for Tech Companies and Apps. #FreeSTDcheck

Now, the company has responded by adding a new feature to the app: an STI-testing locator.

With the support of AHF, Tinder has teamed up with Healthvana, a “patient-engagement platform for health clinics,” to offer STI testing information to interested users. Anyone who uses the app can find testing sites near them and read reviews—hopefully simplifying the daunting concept of getting tested without shaming people who enjoy hooking up.

“I think the collaboration is going to make an impact on millions of lives,” Healthvana CEO Ramin Bastani told the Daily Dot in an interview. “I think it’s fantastic that Tinder wants to educate its user-base with health information, specifically sexual health information.”

It’s all too easy to blame apps like Tinder and Grindr for the rise of STIs like chlamydia, syphilis, and gonorrhea. Though the research that implicates such apps is inconclusive, many believe that an increase in the number of sexual partners can lead to an increased risk of STI transmission. “[Dating apps] have essentially amplified our ability to connect,” Bastani continued. “And that same amplification can very well lead to the rise of infection.”

Still, whether or not the existence of apps like Tinder truly are responsible for new cases of STIs, the integration of testing information into such apps can’t hurt. Indeed, experts in the field of sexual health are pleased with the news.

“Planned Parenthood supports efforts to encourage people to get tested for STDs and anything that will increase access to STD testing, including a STD testing site locator on a digital app, is a good idea,” said Leslie Kantor, Ph.D., MPH, PPFA’s Vice President of Education in a statement emailed to the Daily Dot. “Young people are disproportionately impacted by STIs in the U.S. In fact, about 20 million STIs are diagnosed each year, half among 15- to 24-year-olds.”

Healthvana’s locator is currently available to Tinder users but additional tweaks and new features are in the works. For instance, Bastani shared that his company is developing a way for users to indicate if they’ve been tested recently.

Tinder and Healthvana’s partnership could pave the way for more transparency and accessibility in dating apps, and AHF is optimistic that it won’t be the last step. “[I]t is such welcome news that Tinder will add a Health Safety section with a link to Healthvana, making it easier for people to find testing locations through an easily accessible, modern platform,” Whitney Engeran Cordova, AHF’s Senior Director, Public Health Division, wrote in a press release. “And we hope to see other dating sites do the same.”

Image via GlobalPanorama/Flickr (CC by 2.0)