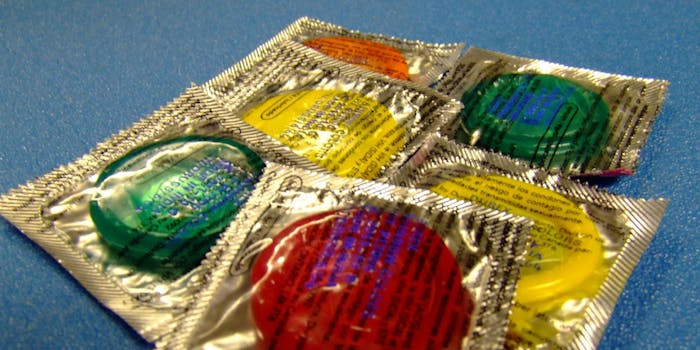 A few months ago, Tinder creator Justin Mateen made headlines when he insisted that Tinder wasn’t a hookup app, “because women aren’t wired that way.” Of course, both parts of this statement are outrageously, categorically untrue: Millions of men and women alike are using Tinder to find casual hookups.

That’s why an advertising firm has teamed up with the AIDS Task Force to create the Tinder AIDS Project, a clever yet somewhat problematic advertising campaign urging hookup-happy Tinder users to adopt safe sex practices.

Created by the Israeli advertising firm GREAT Interactive, the ad demonstrates what would happen if Tinder was used as a medium “for delivering the message of safe sex in the most relevant way.” How did they accomplish this? By creating fictitious Tinder users—all of whom are female—and showing photos of them with multiple partners.


When you’re done browsing through the photos, the following message pops up, accompanied by a red AIDS ribbon: “You’re probably not her only match. Use a condom.” GREAT apparently tested the ad out on the platform, and many users responded favorably to the ad.

To be fair, the campaign is clever—what better way to spread a positive social message than to broadcast it on an app used by millions every day? And it’s never a bad idea to advocate for safer sex practices, especially on a platform that’s implicitly, if not explicitly, used primarily to find casual sex partners.

Yet because all the fake user profiles in the ad are female (and because of the ominous “you’re probably not her only match” message at the end), GREAT’s valuable social message is compromised by blatant slut-shaming. Despite what the ad suggests, it’s always a good idea to use a condom when you have sex with someone you meet on Tinder, regardless of whether you think she’s promiscuous or not. (And even if she is, why assume that she’s not using a condom with her other “matches”? In what universe does “enjoying sex with multiple partners” automatically equate to “reckless, disease-ridden whorebag”?)

Because the Tinder AIDS Project is presumably just an ad campaign, and not actually a feature to be integrated into the Tinder user experience, debating the merit of the ad is ultimately moot. But it raises interesting questions about whether dating apps like Tinder, which are ostensibly being used by at least some of its users as a quick and convenient way to find casual sex partners, should assume a role in promoting safe sex practices. But as long as Mateen keeps denying that his app is being used for casual sex in the first place, that seems highly unlikely.

Update: Raz Messing, the executive creative director of GREAT, reached out to the Daily Dot saying the Tinder AIDS Project “addresses men and women alike. We made fake male AND female profiles with alternating partners, so we aim at shaming both sexes…:) It just isn’t shown on the study case.”