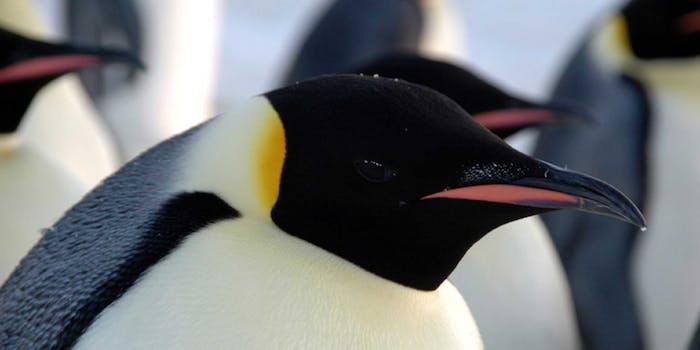 The first Antarctic Tinder match was somehow not between two penguins

This could bring a whole new meaning to an 'Eskimo Kiss.'

What’s a lonely American research scientist stationed in Antarctica to do? Find some romance, of course. Seeking company via the shameless dating and hookup app, Tinder, one man made a blind attempt to find someone, anyone, out there in the desolate frozen continent.

The scientist (who would like to remain unnamed; he’d rather not be punished for using expensive broadband to find a hookup) was in disbelief when he found someone on the app who was just a 45 minute helicopter ride away. Though he’d used the app regularly in the United States, he wasn’t expecting to find anyone else on Tinder in such a remote location. He swiped right before his lonely mystery ice angel could get away.

Within minutes, it was a match! The woman was also a researcher, and the two soon met, becoming Tinder’s very first match in Antarctica.

“She was quite literally camping in Antarctica, went on Tinder, and found me. It’s mind-blowing,” the scientist told NY Magazine.

The meetup went on to break more Tinder norms, as the two did not hook up. But the scientist isn’t discouraged. The meeting was short because she was leaving Antarctica the next day, but he says there could still be potential there..

“I have yet to become the first Tinder hookup in Antarctic history,” he told NY Magazine. “But she is actually coming back, and we may overlap. There’s still hope.”