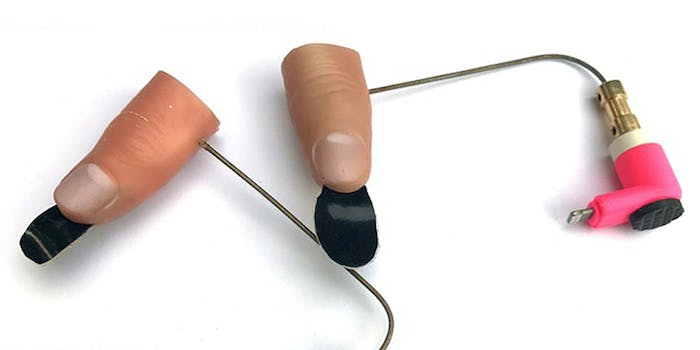 Tinder is about to hit a whole new low.

It’s no secret that swiping on Tinder can be demoralizing. But a crew of British bros is taking pain-free swiping to a whole new low.

The finger-dongle is the brain-child of a U.K.-based bloke who was tired of watching his friend swipe endlessly on Tinder. (So hard watching someone flip through photos!) The creator, who wishes to remain nameless, told the Daily Dot, “I was basically in the bar and one of my friends was just constantly on his phone and he was just saying yes to every single person. So I wondered, if you say yes to everyone do you have to be there yourself? Could there be a gadget that could say yes to everyone for you?”

Soon after, Mr. Tinda Finger teamed up with his pals to create a prototype. The friends launched a Kickstarter and achieved full funding in 10 days.

Despite the enthusiastic response on Kickstarter, the inventor of Tinda Finger says he’s received mixed reviews. “Half the people think it’s great—it’s a gag, a gift for friends. And the other half are saying, ‘Are you serious?! Is this a joke?!’”

He added, “There have been quite a few requests for a female version which just swipes no to everyone.”

It’s not hard to see why audiences are perplexed. The Kickstarter video for Tinda Finger hardly seems designed to get laughs. If it is, we must be losing something in the translation of a very, very dry British wit.

The scenes depict all-male friend groups looking utterly bored as they have beers and shoot pool while another friend is engrossed in his swiping. The narration, too, is extra-dry. If anything, the video seems to ask that age-old question: Do I pick lack-luster interactions via a screen, or numbing interactions with my emotionally muted friend group?

All (sorta) jokes aside, one person who doesn’t think the tool is a gag is the lovelorn friend who inspired the gadget. “He loves it! He uses it all of the time and his number of matches has rocketed,” said the creator.

When pressed for details about the quality of his friend’s interactions, the inventor—who is an engaged man and claims he doesn’t use Tinda Finger himself—had little to say. “For him, it’s just purely a numbers game. He just says yes to everybody to maximize his chances.”

The team at Tinda Finger has ordered parts to begin production and will be launching a website in time for the holidays. “We’re hoping to sell them before Christmas and then maybe Valentine’s Day…”

No word yet on when the “Swipe Left” model will come out.