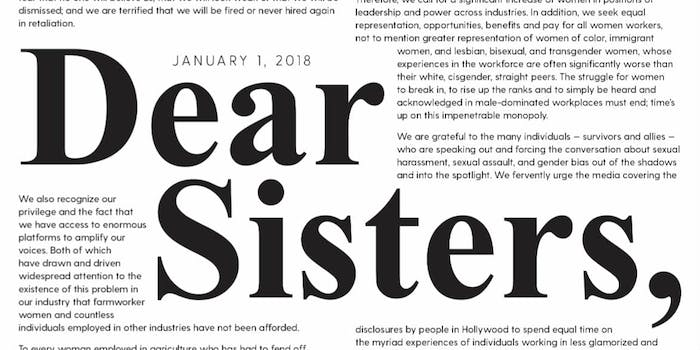 It's called Time's Up, and it's just getting started.

Seizing and steering the momentum of the #MeToo movement and so-called Silence Breakers, more than 300 prominent women in Hollywood unveiled an ambitious initiative Monday to fight systemic sexual harassment in workplaces across the U.S.

Called Time’s Up, the initiative includes a legal defense fund that already touts $13 million in donations.

The announcement was made in an instantly iconic Instagram post. A version of the open letter was also published in the New York Times and the Spanish-language newspaper La Opinion.

“We remain committed to holding our own workplaces accountable, pushing for swift and effective change to make the entertainment industry a safe and equitable place for everyone, and telling women’s stories through our eyes and voices with the goal of shifting our society’s perception and treatment of women,” the letter closes.

Time’s Up supporters include a Rolodex of Hollywood’s A-list: Ashley Judd, Eva Longoria, Natalie Portman, Rashida Jones, Emma Stone, Kerry Washington, and Reese Witherspoon, among many others. Even more co-signed the announcement on Twitter.

Time's up on silence. Time's up on waiting. Time's up on tolerating discrimination, harassment and abuse. #TimesUp Sign the solidarity letter & donate to the @TIMESUPNW Legal Defense Fund: https://t.co/eTwKtOboIl pic.twitter.com/q8aok1HTGg

Incredible movement. I missed their epic meetings while shooting my show, but wholeheartedly endorse this great effort by so many I admire. Powerful Hollywood Women Unveil Anti-Harassment Action Plan https://t.co/l61o0Hvl0L

Much of the focus of the #MeToo movement has been on high-profile women and their accusations against the Hollywood elite, a trend that has prompted significant criticism for its disconnect from the plight of ordinary workers. But Time’s Up devoted a significant amount of its announcement to addressing the plight of the more than 700,000 women working “agricultural fields and packing sheds across the United States” who signed an open letter in November that both expressed their support for Hollywood actors and lamented their own inability to combat widespread sexism in their field, due to fear of retaliation and a lack of stability and opportunity.

“We particularly want to lift up the voices, power, and strength of women working in low-wage industries where the lack of financial stability makes them vulnerable to high rates of gender-based violence and exploitation,” the letter reads. Its message is clear: “We stand with you. We support you.”

On the Time’s Up site, you can add your name to its Letter of Solidarity and donate to its legal defense fund. At press time, the associated GoFundMe campaign has raised $13,480,148.