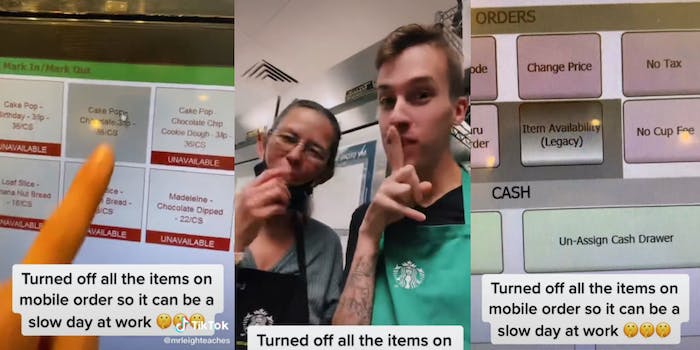 ‘They can’t fire me if I already quit’: TikToker says he made items unavailable on Starbucks app for easier workday

In a viral TikTok video posted on Wednesday, TikToker @mrleighteaches shows how he and his co-workers at Starbucks intentionally made items unavailable for mobile orders on the Starbucks app so “it could be a slow day.”

The video, which by Friday had over 150,000 views on TikTok, gained mixed reactions.

User @katvupton said, “I used to work at Starbucks at one of the busiest stores in the region and never did this. Find a different job if you hate it.”

Another user, @meowwch, added, “People want $15 an hour but can’t do the bare minimum their job entails.”

Some users, however, supported the decision to hide items to make an easier workday.

“I’ve been on both sides of this and I still support your decision,” user @jellyd0e said.

Users who say they work at Starbucks also commented saying that they are required to turn off mobile orders when an item is almost gone.

“STARBUCKS BARISTA HERE, if we are almost out of something it is policy to turn it off for mobiles, especially if it’s something you order a lot,” user @elithedemocrat wrote.

Since many people have left negative comments under the TikTok, @mrleighteaches posted another video on Thursday with a Kourtney Kardashian voiceover. In the video, the TikToker mouths the words to Kardashian saying, “We all have different priorities, and like, working, it’s just, it’s not my top priority.”

The TikToker could not be reached for comment. Starbucks did not immediately respond to the Daily Dot’s request for comment.