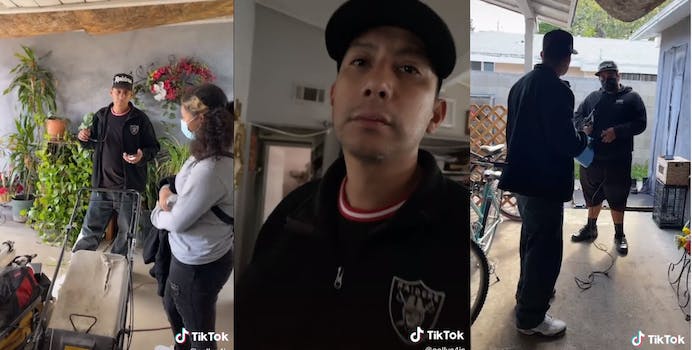 ‘You contaminated all of us’: TikToker blasts brother for not wearing mask, exposing 7 family members to COVID

The family dispute played out over a series of posts.

In a viral series of TikTok videos, user nellys4js did not hesitate to air family grievances.

She says that her brother, who doesn’t wear a mask, exposed seven members of her family to COVID-19. She says he lives with their mom and blames him for infecting her. She says their mom was in the hospital and is now on oxygen at home.

“My brother exposed all of us to fucking COVID and refuses to wear a fucking mask. Seriously? You contaminated seven of us,” she said in a viral TikTok that has more than 668,000 views and topped Reddit’s PublicFreakout message board on Tuesday.

“My mother’s barely getting out and you don’t give a fuck,” she adds.

In subsequent videos, she says in Spanish that her brother tested positive but that after quarantining for 14 days and testing negative, began going out without a mask and partying. She said he’s 40 years old.

In another TikTok, she films him: “This is a fucking stupid ass that doesn’t give a fuck to give us COVID,” she says. “Get the fuck out of here. You contaminated all of us.”

And in another clip, she confronts her brother as he gets combative toward her son.

“Don’t talk shit to my son, you stupid ass,” she says in another TikTok from this week. Her son can be heard saying “This is all your fault” in the background.

In a follow-up video from Monday, she speaks more calmly, saying she was “devastated that all of us got COVID, my brother not even caring.” She said she has received more than 1,000 messages and has one for viewers herself: “I’m so sorry that a lot of people out there have lost loved ones because we have people like my brother that just have no shame and they don’t care and they don’t want to wear a mask.”

She says that she kicked him out of their mother’s house while the mother recovers and is on oxygen. She says she called the police during the family confrontation, too. She also posted a video of her mom, now resting at home, on oxygen, and apparently in her bedroom.

In a TikTok from last week, she thanks her 16-year-old niece for taking care of her COVID-positive grandmother while also having the virus, “staying up for two nights.” In a follow-up video from three days ago, she says that her mom is “slowly recovering.” Here, she thanks friends and neighbors in both English and Spanish for checking in.

The saga is a viral and jarring example of divisions within families, pertaining to personal risk and its effects on others, all amid a pandemic that’s claimed more than 556,000 deaths in the U.S.