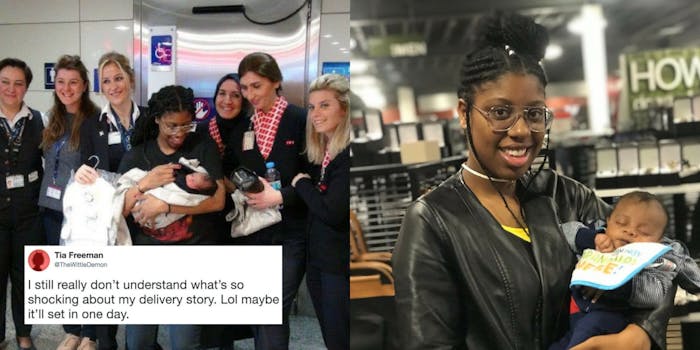 This story is nothing short of incredible.

A Nashville woman who gave birth to her son in an Istanbul hotel room all by herself—with only the help of YouTube videos and a WikiHow article—has, naturally, gone viral.

Her story, detailing her undetected pregnancy, swift international labor, and quick thinking, has received thousands of likes and retweets on Twitter, along with international news coverage across Europe and the United States.

I still really don’t understand what’s so shocking about my delivery story. Lol maybe it’ll set in one day.

Tia Freeman, a 22-year-old U.S. Air Force senior airman, told the Daily Dot that prior to tweeting out her viral thread, she had told only family members and close friends about the birth of her son Xavier. However, hundreds of internet strangers have been moved by Freeman’s story of strength to tell her how astounding and brave her birthing “plan” really was.

According to Freeman’s Twitter thread, which you can view in its entirety here, she didn’t know she was pregnant until January, when she was in her third trimester. She told the Daily Dot, however, that she had taken an at-home pregnancy test, so she didn’t know how far along she was, though she suspected it was later along she hadn’t had sex since last summer.

I didn’t know I was pregnant for awhile (already in my 3rd trimester) and before you ask the birth control I was on made it so I didn’t have a cycle every month. So not having a period wasn’t an indicator for me. On top of that I didnt really gain any weight.

Me when I found: pic.twitter.com/An5QA3hX8A

Up until that point, Freeman wrote in her thread, she hadn’t experienced any weight gain, and the birth control she used completely stopped her monthly period. After finding out, she wrote she was in denial for a month and didn’t want to tell anyone, and had already made plans to visit her friend in Germany in March. So, thinking she still had time in her pregnancy to travel and return to the U.S. before she gave birth, she took her 14-hour flight to her layover in Istanbul, Turkey.

So I had already purchased tickets for a vacay in Germany and ya girl was not about to waste international flight money. So I was like if the boy comes on time I should be all good in the hood. So I came home for two seconds before hopping on the my flight to Germany. pic.twitter.com/SWYOpatnEN

During the flight Freeman had limited meal options, being a vegetarian, and chose the salmon meal. However, she began cramping with an hour left before landing and was unsure if it was the salmon or the pregnancy. After napping on the plane and waiting through customs, Freeman’s cramps grew worse, to the point where she thought she was going to vomit or pass out.

After a Google search, she couldn’t determine if she was actually in labor since her water hadn’t broken, but she knew one thing for sure: She was not about to have her child on the floor of the airport. So, after making it back to her hotel and assessing her resources—being in a foreign country where she can’t communicate in English—she did a little more internet searching and caught herself up to speed on how to deliver her baby by herself.

Freeman told the Daily Dot that she had used a WikiHow article to learn how to cut the umbilical cord (more on that later), and followed these two YouTube videos from channels AWE me and eLimpid to take herself through the birthing process:

And then, the moment of triumph: Freeman filled her bathtub with water, got into position, bit down on a towel in her mouth, and started pushing. After about five to six pushes, Xavier “popped out,” she wrote.

Luckily it happened pretty quickly. I only had to push about 5-6x before a baby popped out. Lol now let me tell you babies are buoyant. That little joker said bloop and floated right on up to the top of the water 😂😂 pic.twitter.com/IuqwKXFb2L

So it’s done, right?! Wrong, because Freeman still needed to push the placenta out of her and cut the umbilical cord. After waiting for the placenta to pass, she dropped that into a sanitation baggie provided by the hotel, then boiled some shoelaces in the electric kettle in the room to sterilize and use them as cord clamps. She then tied them in two places along the cord and cut. After cleaning up the mess of a birthing bathroom, she breastfed Xavier and went to bed.

The next day, she took herself and Xavier to the airport; even though she knew they couldn’t fly out, she needed help and thought someone working there would know what to do. After convincing the airport staff she wasn’t a human trafficker and having police and medial professionals check her and Xavier out, she found herself bombarded with Turkish press marveling at her miracle birth.

Turksh Airlines then shuttled her to the U.S. consulate, where Freeman answered questions and applied for Xavier’s birth certificate and passport. At a hospital, doctors assured that she and Xavier were perfectly healthy. Since Xavier couldn’t travel on a plane for two weeks, Turkish Airlines paid for their hotel stay, comped all her meals, and upgraded her return flight.

(His middle name is Turkish) pic.twitter.com/HVlnvqEClQ

Freeman’s story had audiences on the edge of their seats, tweeting praises at her for having the strength to not only deliver on her own, but to go through the airport and consulate the next day. However, Freeman told the Daily Dot that she thought anyone could do what she did.

“I think slowly but surely, after reading a lot of the responses and comments to my thread, [the shock] finally is [setting in]. Everyone is calling me brave or a superhero, but truthfully I think anyone in my position could have done it,” Freeman wrote to the Dot. “In a high-intensity situation like that, your mom instincts begin to kick in. It’s true what they say—there isn’t anything a mom won’t do to protect her baby.”

Yes, being a mother came unexpectedly to Freeman, and her family as well; she wrote in her thread that most of her family didn’t know until days after she gave birth, and told the Daily Dot that Xavier’s father was also shocked at the news, but is handling it well. Though Freeman said she always saw herself as a career woman, working full time on base in Tennessee, or the “cool aunt” spoiling her siblings’ kids, she’s found she loves her son, who is seven weeks old today, more than she could have imagined.

“Yes, it was a lot of supplies to gather on such short notice, but my family and friends really helped so much. I’m eternally grateful for the love that I have been shown. It really does take a village,” Freeman told the Daily Dot. “Since this is my first child, I’ve been leaning heavily on the female members of my family, and of course the internet.”