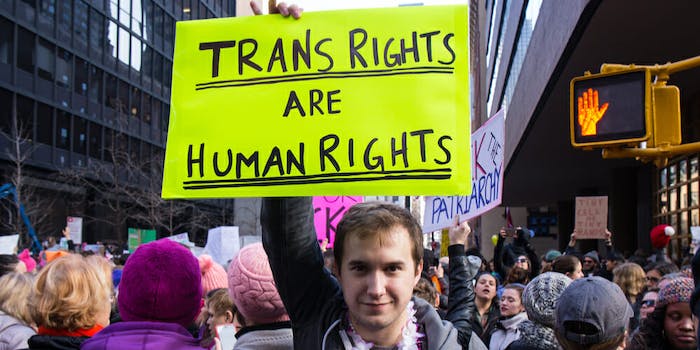 The publication has since apologized.

The Economist has issued an apology after receiving heavy criticism for a tweet that asked: “Should transgender people be sterilised before they are recognised?”

The now-deleted tweet was, as they say, ratioed hard. It linked to an Economist article about the sterilization of transgender people in Japan, but the idea that a major international publication would frame the sterilization of a marginalized group, especially one as frequently attacked as trans people, as a debate was deeply disturbing to many.

Anyone:
The Economist: Should trans people be sterilized? Is eugenics actually good? Is murdering trans really bad?

And they delete it one second after I tweet this. But yeah, the press needs to stop asking questions like "should trans people be sterilised?" as if it doesn't invite a monstrous answer (as all the Nazis answering "yes" to The Economist's tweet illustrated).

Trans model Munroe Bergdorf posted a screen cap of the tweet and expressed her shock and dismay. “I can’t believe how every day it these conversations go from bad to worse,” she wrote on Twitter. “I can’t understand how one can look at this and not see the parallels of Nazi eugenics within this headline.”

Diana Tourjee, a journalist for Broadly, said of the tweet, “Trans people are regarded as animal, and we are meant to accept this as critical discourse, lest be accused of silencing free speech.” She then gave examples of other “discourse” in the same vein.

“The article explores in detail a question that was put to Japan’s Supreme Court. Our tweets often use a line from the articles they link to,” the publication explained. “We were wrong to use the first line of this article out of its context. Sorry.” In the context of the article, the question is followed with, “Earlier this year Japan’s Supreme Court decided that the answer is yes.”

Many people in the replies, however, felt that the question was too sinister to have been a simple mistake.

I'm sure I'd be moved by this if you employed a single trans person, hadn't spent years framing trans rights as a danger to women and promoting the lie that less than 1% of the population are causing society all these awful problems, when all evidence suggests the reverse is true pic.twitter.com/km2njozRMJ

You know full well that the question is itself an ideological position. And your 'sorry' is really gross here. You should delete this tweet too.

Whether a scary mistake or a transphobic dog whistle, the effect is the same: The question has been given more power in public discourse.