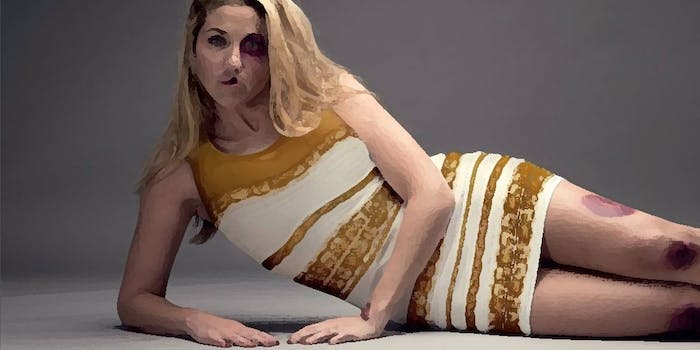 This is one meme-inspired ad we can't take issue with.

It’s been about a week since the gift of #TheDress was given to the world, spawning countless memes and crappy branded ad campaigns. But the Salvation Army in South Africa is taking the traffic bonanza that resulted from the viral phenomenon and using it for good.

AdWeek reports that the organization has just released a domestic violence PSA inspired by the dress. The ad depicts a beaten and bruised woman wearing the iconic garment, flanked with the words, “Why is it so hard to see black and blue?”

The caption underneath reads: “The only illusion is if you think it was her choice. One in 6 women are victims of abuse. Stop abuse against women.”

Of course, this is far from the only branded #Dress-themed campaign that’s emerged in the wake of the viral phenomenon. The ad could easily be interpreted as a craven marketing ploy, as well as a trivialization of the very serious issue of domestic violence (especially in light of the fact that South Africa has been referred to as having one of the highest domestic violence rates in the world).

But the ad is certainly attention-grabbing. And let’s be honest: If advertisers are using #TheDress to give their campaign more reach, well, there are worse things they could be using it for.