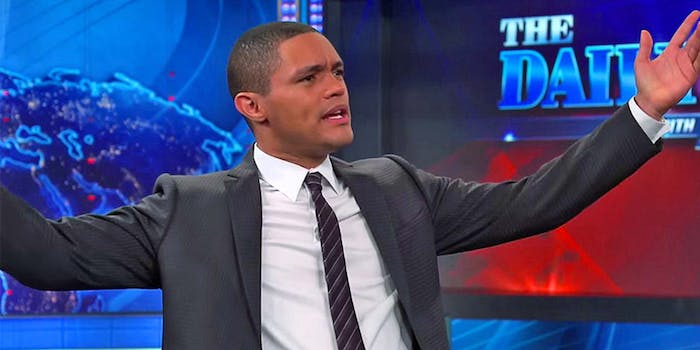 This isn't the first time the show has come under fire for such a thing.

Comedy Central’s The Daily Show is no stranger to controversy. And today LGBTQ activists are upset after the show’s Twitter account posted a Donald Trump joke that poked fun at transgender women.

“What news will drop Thursday between 5 and 6pm?” the Wednesday night tweet read. One of the poll answers was “Donald Trump announces he is now Donna Trump.” The joke essentially implies that gender transitioning is funny because it’s degrading, using Trump as a vehicle to deliver the punchline.

Since they, like the people they make fun of, are deleting tweets now: The Daily Show making a joke at the expense of trans people. pic.twitter.com/73S3MuLl5M

The tweet was later deleted, but not before being screencapped across social media. Suffice to say, activists found the joke offensive and pointed to The Daily Show‘s larger legacy of making fun of transgender people.

And meanwhile liberals are impotently giggling, going "WOULDN'T IT BE HILARIOUS IF TRUMP WAS TRANS AND/OR GAY FOR PUTIN?" Yeah good job pals

Speaking of the Daily Show and transphobia this from 2003 seems relevant. Also props to @Dennis_Kucinich pic.twitter.com/Z8CKnGTdUZ

It also isn’t the first time that The Daily Show‘s Twitter team has faced serious backlash for its sense of humor. In 2016, it celebrated a Supreme Court ruling in support of abortion by tweeting to “go knock someone up in Texas.” Host Trevor Noah also faced backlash for old tweets on his personal Twitter account, which included jokes making light of the antisemitism, misogyny against women, and domestic violence. Comedy Central defended Noah, calling him “a talented comedian with a bright future at Comedy Central.”

Of course, The Daily Show‘s Twitter controversies need to be taken in larger context. Noah, who has nothing to do with running the show’s social media accounts, has been applauded over the past year for insightful interviews with both transgender actress Laverne Cox and Against Me! musician Laura Jane Grace. And despite The Daily Show‘s treatment of transgender people during Stewart’s early years, the show has improved, most notably when Stewart discussed Caitlyn Jenner’s transitioning.

But the controversial response just proves that comedy isn’t apolitical—some jokes hit a little too hard against unintended victims.