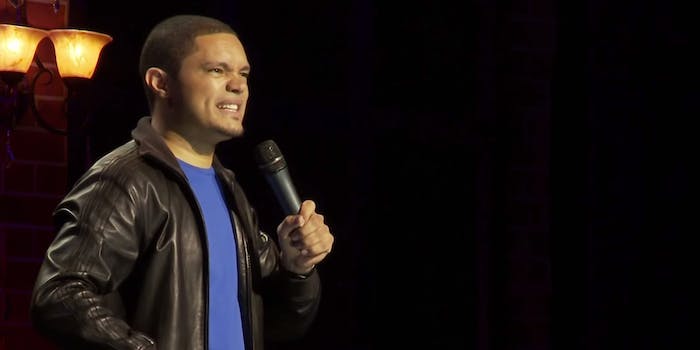 Should Comedy Central have to step in?

In the span of a day, newly announced Daily Show host Trevor Noah experienced both the highs and the lows of being thrust into the national spotlight. Noah’s post-announcement honeymoon period ended quickly when the Internet discovered offensive tweets from his past, but Comedy Central has stepped in to say it’s standing by him.

Many were upset by what were seen as anti-Semitic tweets, as well as jokes about punching and body-shaming women. The Internet’s lightning-fast cycle of insta-judgement ginned up outrage and counter-outrage from Noah’s critics and defenders; suddenly, everyone became an expert on joke-telling and satire.

Some people pointed out the ethical murkiness of judging others based on years-old tweets.

As I watch what's happening to @trevornoah , I'm so relieved that all my tweets are perfect

One amazing thing about Trevor Noah is watching the same outlets reverse their positions on him w/in 24 hours http://t.co/oYjaBH9Lf5

If you're mad about Trevor Noah, you should see what liberal talkshow host Bill Maher has been up to essentially his whole career.

This trevor noah situation reminds me of when walter cronkite had to explain his slash fanfic tumblr.

Ari Shaffir, another Comedy Central personality, also came under fire this week for body-shaming a fellow comedian during a nationally televised stand-up set. The network has not yet commented on that incident. It was around this time last year that Stephen Colbert faced the Internet mob for an out-of-context tweet about Asians.

At press time, Noah had not yet commented on the fallout.