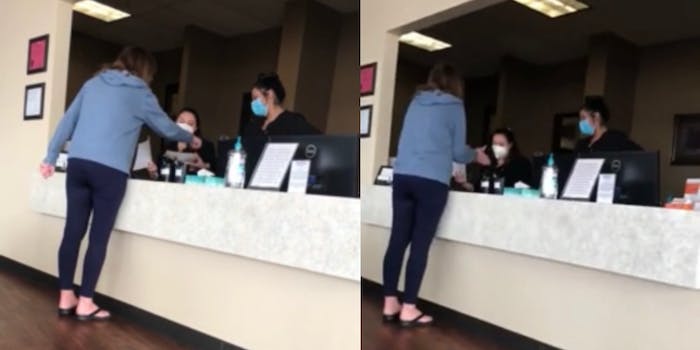 While denying her results, she calls the receptionists 'stupid' and 'f*cking idiots.'

In a viral video that was shared to Reddit on Tuesday, a woman refuses to believe she tested positive for the coronavirus after receiving her results.

The incident reportedly happened in Dallas, Texas, on Monday. In the nearly 30-second video that captured the incident, the woman receives two test results—one negative and one positive—ahead of her surgery. The results prompt the woman to clap and shout profanities at two receptionists. “That says I was positive and then negative,” she says. “I was not positive.”

The receptionists attempt to calmly explain that they could call on her behalf if she’d like another result, but the woman angrily exclaims that “it’s too late” and that she needs to bring her results the day of her operation.

“Y’all don’t even know what the hell you’re doing,” the woman shouts.

The receptionists continue to handle the situation calmly and point to paperwork showing that “[the surgery] was canceled” because of her test results, but the woman appears to get angrier and proceeds to call them “stupid” and “fucking idiots” before the video cuts off.

The video was posted to the r/PublicFreakout subreddit, where one commenter wrote that they “can’t believe people talk to others like this, no matter the circumstance.”

“The thing that always bothers me about these videos is how easy their ugliness rolls off their tongues,” another said.