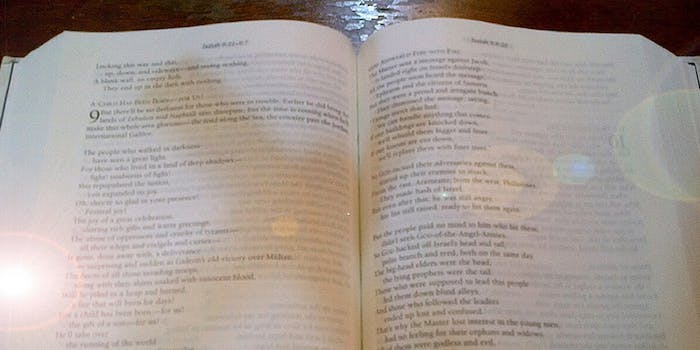 The Lord be with y’all: Texas gets its own Bible

Texas’ dreams of secession may have been crushed, but John Dyer, the director of Web development at the Dallas Theological Seminary, is working to advance the theory that God might have been a Texan. Or at least that Texas could have its own Bible.

He’s developed a plugin for Google Chrome that changes the second-person plural “you” in the Bible to “y’all” on Bible-reading websites like BibleGateway.com. On his website, which includes the warning “technology is fast, but redemption is slow,” Dyer says there are “at least 4,720 verses (2,698 in the Hebrew Bible and 2,022 in the Greek) with you plural translated as English ‘you,’ which could lead a reader to think it is directed at him or her personally rather than the Church as a community.” He explains the genesis for messing with Genesis: “I enjoy the programming gifts God’s given me, I like to tinker with the Bible, and I like to learn new programming techniques such as making a browser extension which before this I had never tried.”

So, for example, this passage from Thessalonians would read:

“Now may the Lord of peace himself give y’all peace at all times in every way. The Lord be with y’all.”

The bigger question: When is someone going to get around to translating the Bible into Emoji?