This isn't the first time one of the coaches has been in trouble.

Two Texas A&M coaches have been suspended after organizing a sexist football clinic for women.

On Wednesday, photos started circulating from a Chalk Talk event presented by the Aggies football team that attracted roughly 700 attendees. The event was aimed at female football fans, but the language in some of the presentations was decidedly tone-deaf.

The Aggies fight song was given a revision: 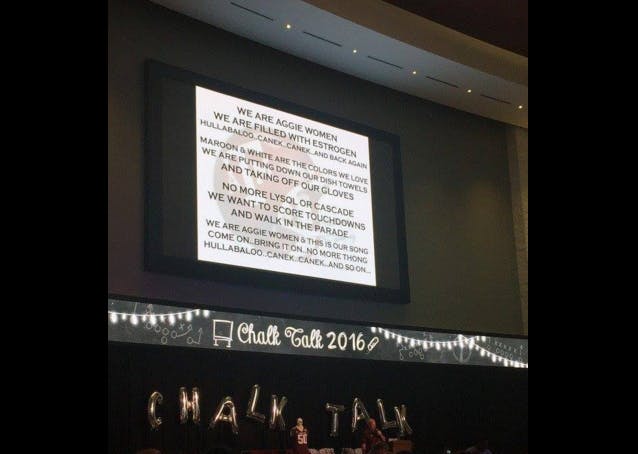 And reporter Anwar Richardson received more slideshow images from a source at the event:

On Friday, A&M issued a statement from head football coach Kevin Sumlin on the presentation from assistant coaches Jim Turner and Jeff Banks, claiming that the two would be suspended without pay for two weeks. Sumlin also claimed he was previously unaware of the “contents” of their presentation.

Texas A&M has issued these statements regarding the offensive material at the recent Chalk Talk for women pic.twitter.com/1ZJtWXsgkS

If Jim Turner’s name sounds familiar, it’s because he was involved in the bullying of an allegedly gay player in 2012, when he was an offensive line coach with the Miami Dolphins. He was eventually fired.

This is reportedly not the first time this presentation has been given. According to the Dallas Morning News, one attendee had seen Turner’s presentation in the past and said it featured similar content. He was previously a coach at A&M from 2008 to 2011, and was rehired this year.

Turner and Banks will also have to complete 20 hours of community service.