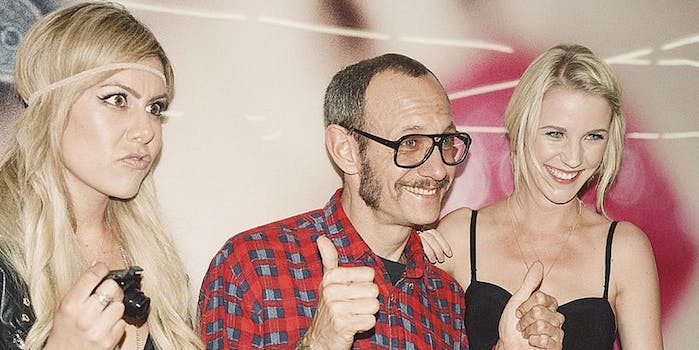 Terry Richardson: Models lied about harassment because the Internet

Richardson claims all his modeling subjects have "free will."

How do you defend yourself against an allegation that you orally raped a young model during what she thought would be a routine photoshoot?

If you’re famed celebrity photographer Terry Richardson, you deny everything and blame the Internet.

Despite his well-known pattern of inappropriate behavior toward models and photo subjects, Richardson is a renowned photographer who’s taken pictures of everyone from Miley Cyrus (nude) to President Obama (not nude). But he’s facing a new wave of backlash after former model Charlotte Waters spoke out to give alarming details about her only session with him. These included the allegation that Richardson directed her during the session to perform oral sex on him and ended the shoot by jerking off in her face. Other allegations that Richardson attempted to coerce models into photoshoots in exchange for sexual favors have surfaced, both before and after Waters’ confession.

In his four-paragraph defense in the Huffington Post, Richardson never directly addresses Waters’ allegations, or any of the specific claims made against him that he solicited models for shoots on Skype by letting them know they’d be expected to perform sexual favors. Instead he suggests that he is coming forward to deliver the truth in a sea of lies.

Waters asserts that she had no idea what would happen in her photoshoot. Richard never actually denies this. He instead states that during a specific shoot in 2004, five years before Waters’ shoot, he “collaborated with consenting adult women who were fully aware of the nature of the work.”

Richardson also states that he “never used an offer of work or a threat of rebuke to coerce someone into something that they did not want to do.” This claim contradicts a public transcript of Richardson allegedly offering to shoot a model, Felice Fawn, in exchange for sexual favors. In the transcript, the person claiming to be Richardson pressures the model to consent by saying “you said no, but thinking yes” after she’s refused him multiple times, and then tells her angrily “then you need to work at mc donald, this is the lifestyle.”

The closest Richardson comes to touching on the wide swathe of allegations of inappropriate behavior toward models is an assertion that he assumes all of his models can say “no” to anything they don’t like:

I give everyone that I work with enough respect to view them as having ownership of their free will and making their decisions accordingly, and as such, it has been difficult to see myself as a target of revisionist history.

It’s difficult to know what Richardson means by “revisionist history,” especially since he seems to be exercising it himself. In the transcript of his Skype conversation with Fawn, he closes by saying “No worries, I never push.” He says this after spending the whole history of their conversation doing just that, after the model attempts to say no and end the conversation no less than eight times.

Finally, Richardson attempts to center his editorial on the provacativeness of using sexual imagery in art. “People will always have strong opinions about challenging images,” he says. But the current backlash he is facing has nothing to do with the moral issues of nude photography. The claims that have sparked outrage are much simpler:

Did he actually direct his model to perform sexual acts, then place his penis in her mouth, straddle her, and have an orgasm on her face?

If he did the alleged act, did he get Waters’ enthusiastic consent before it happened, or did he just assume, as he allegedly told Fawn, that she knew “how things go behind the scenes to get the fame”?

Richardson provides no answers to these questions, but rather suggests they’re more complicated and nuanced than they perhaps are. He also suggests that the only victim of his years of alleged non-consensual behavior is himself:

Believing such rumors at face value does a disservice not only to the spirit of artistic endeavor, but most importantly, to the real victims of exploitation and abuse.

Rather than see the controversy as a way in for a conversation about what the boundaries of “art” are and what consent actually means and how to know when you’ve obtained it, Richardson’s response is an attempt to derail the conversation altogether. Ultimately, his response is unlikely to make “real victims” of exploitation and abuse feel any safer—let alone real models.

Photo via Wikimedia Commons; CC BY 2.0