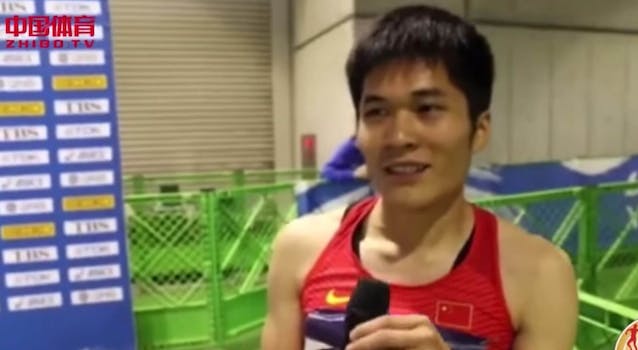 All the runners are cis women.

One result of the recent rise in anti-trans campaigning has been the rash of cis women targeted and subjected to harassment as a result. Whether it’s because they’re gender non-conforming in style, or the viewer considers their natural physical features too masculine, these women have been chased out of public toilets and harassed in public for things such as having short hair or not dressing “feminine” enough.

While trans women are still the primary recipients of transmisogynistic harassment, and the focus needs to stay on them, many people have noted the irony of cis women who fail to meet feminine norms also being subjected to this kind of discrimination. Others claim that this is part of the purpose and that the end goal is enforcing traditional gender norms on cis women as well as forcing trans women back into the closet.

Honestly I think it's still an important point to talk about because TERFs are literally spreading misogyny and worsening the patriarchy.

A lot of news outlets let their views go uncontested as "feminism" and in that respect it's important to show how at odds that is.

The most recent high-profile cis victims of this trend are the competitors from a race at the Chinese National Athletics Championship held in Shenyang, China. Twitter users are accusing several of the runners, including Tong Zenghuan and Liao Mengxue, of being men based on nothing but their physical appearances.

These are all cisgender women, from the 2019 National Athletics Championships held in Shenyang – but trans exclusionists…

Wow, so we are supposed to believe the two obvious males in this 4×4 women's relay team are women? More cheating in women's sports. They just keep coming. pic.twitter.com/vlIF1mTu1q

The Chinese Athletics Association has since gone on record confirming that all the competitors are cis women.

Still here you fucking are, claiming to be able to "tell these are not ReAl WiMin". https://t.co/9eBOyEBoeC This article states that these are all in fact biological women, however, speculating whether anabolic steroids have been involved. So really, calm down.

However, despite this, TERFs and their allies are still claiming otherwise on Twitter, unwilling to accept that women who don’t fit their physical standards for womanhood actually exist.

Some people pretend they can't distinguish a male from a female body. I wonder who they think they're kidding with their talk of 'cis women' – what else does that mean but people with a female body? I.e. WOMEN.

They're gaslighting you. For all I know, all 4 were natal males, but at least 2 appear to be normal males now. This is some magnificent Chinese trolling, possibly as a challenge to the IAAF.

We are genetically programmed to recognise the differences between male & female for procreation purpose. The photograph clearly shows 3 males & 1 female. Thank you for naming it, Helen. The Chinese regime is notoriously repressive. Anyone who believes their spin is very naive.

Many of them are also hailing @MsHelenWatts as a persecuted heroine of the women’s movement as she has now set her account to private due to the amount of conflict her tweets have created.

Looks like a great deal of men. Sending support.

If it helps – I appreciate you. Women for centuries have had to fight for our rights in the face of hatred and abuse, be proud to call yourself a warrior. Every single woman & man I have spoken to, bar none, agree there is no place for male biology in woman's sport.

If this all seems familiar to you, it’s because it’s happened before. Casta Semenya was subjected to an unbelievable amount of misogynoir and transphobic investigations after her win at the Olympics, and many feel it’s no surprise that the IAAF’s ruling applies specifically to the events she does best in despite their being the ones least impacted by higher testosterone levels. Successful cis women of color, especially Black women like Michelle Obama and Serena Williams, have also regularly been accused of being men in disguise. There’s a long history of attempting to dehumanize women of color, particularly Black women, by attacking their femininity, calling them manly and aggressive, and deriding them for failing to conform to Eurocentric beauty standards. According to white supremacy, women of color are not real women and don’t deserve to be treated as such. The clearly racist angle of the attacks on the Chinese runners form a clear part of that pattern.

Fortunately, a lot of Twitter users are also aware of this and calling it out.

You started this by judging people of colour on their facial features. Don't complain when you end up surrounded by racists who think they're in good company.

I suppose you think all women should look like the western, 'feminine', white ideal? Like this maybe?

Remember how many claimed Michelle Obama was 'a man'? pic.twitter.com/qnot07HC59

Categorising people based on "bone structure" was literally invented and used by racists pic.twitter.com/TnNsyvCorS

But this still isn’t enough to combat the problem. Women, cis or trans, don’t deserve to have their gender up for public debate and we must stop holding up white femininity as the standard of womanhood. While the runners in question are all cis women, it ultimately shouldn’t matter, and no one should have their body or gender identity publicly dissected like that.