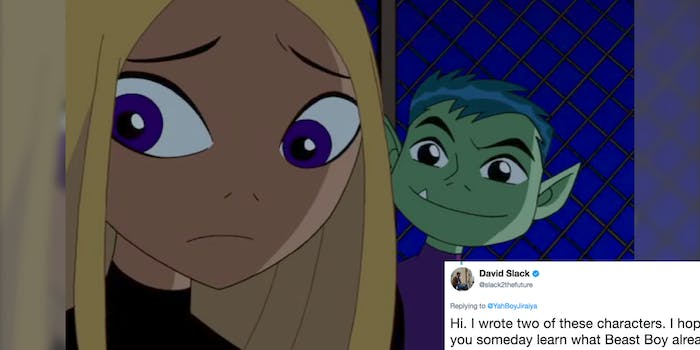 Beast Boy from the animated series Teen Titans may have the ability to turn into a literal animal, but he’s far from the kind of monster who’d believe in the misogynistic “friend zone” theory. Just look at his own writer’s response to such a gross belief.

On Monday, TV writer and producer David Slack, who has worked on Teen Titans, Jackie Chan Adventures, and MacGyver, shut down one fan’s friend zone assertion, showing that TV has a much broader cultural implication than pure enjoyment.

“These dudes were the definition of being in the friend zone,” the account, an apparent Naruto fandom meme page, wrote.

The tweet plays on the outdated, consistently refuted notion that people, usually women, somehow owe their friends, usually men, romantic or physical intimacy for the time and energy invested into the friendship. The “friend zone” also implies some sort of entrapment executed by women, as well as resentment held by the men “stuck” in such a zone and unable to express their feelings without being rejected.

In other words, the friend zone is a total myth implying that women are to be valued for what they can offer men, instead of for who they are as people. Which is exactly what Slack, the former head writer for Teen Titans, took issue with when he stepped in and shut that idea right the hell down.

Hi. I wrote two of these characters. I hope you someday learn what Beast Boy already knew: that women are actually people…

They're not games to be won. They have their own minds & hearts, & they don't owe you a relationship just because you're attracted to them.

“I hope you someday learn what Beast Boy already knew: that women are actually people,” Slack replied. “They’re not games to be won. They have their own minds & hearts, & they don’t owe you a relationship just because you’re attracted to them.”

While an engaging tweeter tried to prove Slack wrong by insisting that acknowledging a “friend zone” isn’t inherently misogynistic, Slack broke his explanation down further.

It's neither strange nor nonsensical. The statement "she put me in the friend zone" implies it's a bad place to be & you don't belong there.

This implication rests on the assumption that you have the right to be in the "romantic zone" regardless of how the woman feels.

And that disregard for the wants, needs, & basic humanity of a woman you claim to like… is misogyny. Hope that clears things up.

Yes, again, the friend zone is a nonexistent space that only reinforces negative ideas about women. Perhaps we could get a head start on shutting down this toxic thinking by getting other children’s cartoons to jump on board from the first episode? Just a thought.