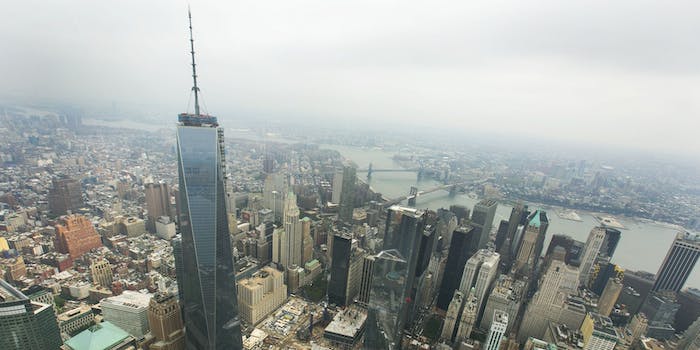 So much for national security.

He’s remained fairly tight-lipped about his stealthy journey, but one thing is certain: For two hours, 16-year-old New Jersey daredevil Justin Casquejo was on top of the world (trade center).

The New York Post has reported that around 4am on Sunday, Casquejo “crawled through a hole in a Ground Zero fence” and got a lift to the skyscraper’s 88th floor “from a clueless union elevator operator, even though he had no ID.” He then hiked up to floor 104, past an apparently snoozing security guard, who has since been fired, to explore and take photos on the roof.

Because Casquejo was caught by a construction worker on his way down and brought in for questioning by the NYPD, evidence of the climb didn’t show up in his Twitter feed—instead he updated friends when he finally returned home and summed up his feelings in a single word.

You can, however, check out images documenting Casquejo’s parkour on the Jersey side of the Hudson. One photo shows him receiving medical attention after cutting his hand on a fence.

What have you done with your life? pic.twitter.com/6uZCW4mk3p

Flipping into the Hudson because we’re crazy. pic.twitter.com/5Vw38iQSu3

Back on that parkour flow pic.twitter.com/o0kw8M5OpV

For his latest escapade, Casquejo faces a charge of misdemeanor trespassing, which seems pretty lenient compared to a stretch at Guantánamo Bay. Maybe, once that legal business is behind him, he can hook up with some like-minded Russians for another vertiginous stunt.