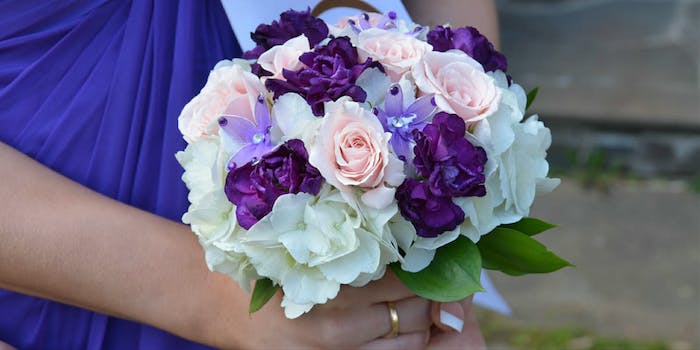 The community is not happy about this.

Two queer girls were suspended from Alexandria High School in Alabama on Tuesday after one publically asked the other to prom.

According to fellow senior Ashley Fadely, the promposal happened during the school’s talent show, with the girlfriend of a performer doing the honors. In the moment, the two girls were ecstatic, she says: They hugged, celebrated, and largely didn’t derail the event’s performances.

But instead of honoring the occasion, the high school proceeded to suspend the proposing student, along with another teenage girl who helped the student ask out her partner to prom. In the school’s eyes, that’s because the proposal was a “disruption.” Now students fear that the queer couple will not be allowed to attend prom at all in the wake of the suspension.

“It was right after her performance. No words were spoken by them. They just got happy, hugged and that was it,” Fadely said to AL.com.

Fadely finds the entire situation particularly hypocritical, as the school has never disciplined students for prom proposals in the past between straight couples. Even a marriage proposal took place between students once with no repercussions, although the school insists that the couple’s sexuality was not the reason for the suspension, the Anniston Star reports.

The controversy has since blown up locally, with some students turning to social media in disgust against the high school. One former student called the situation a “clear violation of the law” that “tramples the young girls’ moral character.” Others, including Fadely, vow not to attend prom if the lesbian couple isn’t allowed to attend.

“I don’t think it was right that they might not be allowed to go to prom. I’ve decided… I’m not going to prom,” Fadely argued to the AL.com. “Some students have been trying to get refunds for prom (fees already paid).”