The selfie is going viral amid concerns over violence against police.

Police officers have an extremely dangerous job: serve and protect the public. But in Texas, one young citizen turned the tables in an inspiring way.

Deputy Constable Tommi Jones Kelley of Harris County, Texas, recently posted the photo below to Facebook, saying that a teenager approached her while she was pumping gas and asked if he could watch her back, reports CNN. 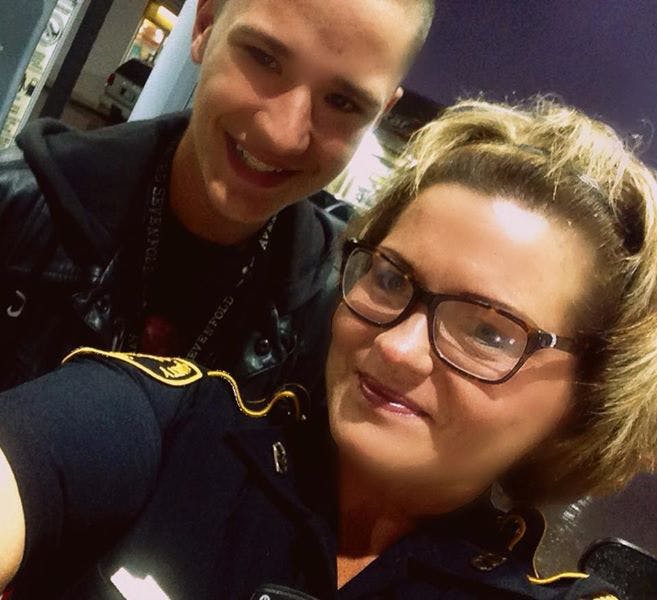 “[T]his teenager I’ve never met before is standing right behind me & says, ‘ma’am, do u mind if I stand here behind you while u get ur gas?'” Jones Kelley wrote on her Facebook page. When she asked why, the teenager, whom Jones Kelly identified as Mckinley Zoellner, said, “to make sure You stay safe!”

Jones Kelley added that Zoellner “stood there empty handed, but he for sure had my ‘6’ while my back was turned.”

The touching incident comes a week after Harris County Deputy Darren Goforth, a colleague of Jones Kelley’s, was gunned down on Aug. 28 while refueling his police cruiser. Police say 30-year-old Shannon Miles ambushed Goforth in an “execution-style” attack. Miles has been charged with capital murder.

The execution of Goforth has sparked a nationwide debate over whether movements like Black Lives Matter have triggered proactive violence against law enforcement in the U.S.

Thousands turned out to honor Goforth during his funeral on Friday.

On Facebook, Jones Kelley’s story has prompted an outpouring of support from concerned Americans from across the country, with countless posts to her page wishing her and her fellow officers safety on the job.

As for Jones Kelley, Zollner’s actions have restored her faith in humanity, saying, “With all the terror going on nationwide, this reassured me there are still some pretty awesome individuals out there!”