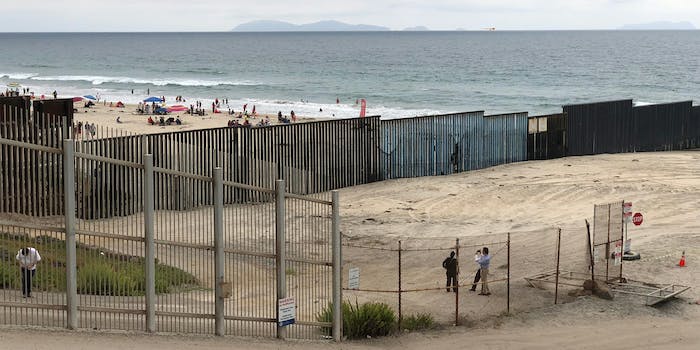 Why such a fight over this particular photo?

A group of asylum seekers at the U.S.-Mexico border was hit with tear gas launched by U.S. Border Patrol agents late Sunday. The response online was split down party lines, with conservatives calling it downright inspiring that America would protect its border, and liberals deeming it an atrocity.

But a third group had a different response: Trying to prove parts of it didn’t happen.

President Donald Trump’s biggest supporters, who mainly support the use of force on the border, are also adamant a photo from it is staged. Their argument comes from a picture by Reuters of a woman and two children, which went viral in the aftermath of the tear gas attack.

Fans of the president pounced on the media publishing the picture, taking a Zapruder-style lens to the image.

Look at the high resolution picture of the guys in the back holding each other for the photographer to make it look like they are running. They know how naive & foolish the liberal/Progressive/normal viewer brainwash gang is. https://t.co/cgOkTkdoZF

The image picked up steam on Reddit’s r/The_Donald forum, where it was used as an immediate reason to debunk the news. Everything from the children’s feet to their outfits to the placement of others at the border was picked apart, proof that this specific picture, which was published by Reuters, was staged.

It also became a canvas for memes, with Trump getting photoshopped into the image, screeching at the family to keep them out.

The photo debunk story made it up to the Gateway Pundit, a conservative blog, where it was branded as proof of a “HOAX,” saying it was nothing more than a photo op. But the same site published an article hours earlier saying the tear gas attack happened.

The claim that this specific image is a hoax reveals a stark truth about Trump fans. In the same conservative circles, the U.S. defending its border with tear gas was met with cheers, and the use of tear gas was all but confirmed last night by Homeland Security head Kristjen Nielsen.

This AM, @CBP was forced to close the #SanYsidro POE to ensure public safety in response to a large # of migrants seeking to illegally enter the US. They attempted to breach legacy fence infrastructure along the border & sought to harm CBP personnel by throwing projectiles @ them

.@DHSgov will not tolerate this type of lawlessness & will not hesitate to shut down POEs for security reasons. We'll seek to prosecute to the fullest extent of the law anyone who destroys federal property, endangers our frontline operators, or violates our sovereignty.

So why such a fight over this photo? It should be held up as proof the U.S. is willing to go to great lengths to keep out migrants. But it’s not. While many in conservative circles would say they want the U.S. to respond to behaviors like this with force, those who call for the use of force prefer it to be faceless. If it’s shown on an intimate scale, it makes it harder to justify. Hence the attempt to discredit it.

The use of tear gas can be real—a lone person being hit with it can’t, apparently.