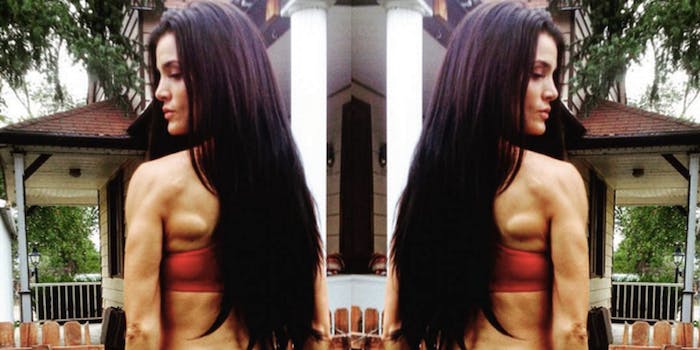 It was a close call for the single mother of four.

A teacher in Utah flexed her muscles in more ways than one when she won a staredown with her school—one that allegedly tried to fire her after a parent found her bodybuilding pictures online.

Mindi Jensen teaches at North Sanpete Middle School, and in her spare time, the single mother of four is a bodybuilding fitness and bikini model. She told ABC 4 Utah that she decided to take up modeling after feeling depressed and unhealthy.

“I thought with my body being stronger maybe it would soak into my emotions, my heart, and my brain and strengthen that so I started fitness,” she told them. “I get women, single women, single mamas that message me, even on Instagram they will message me and tell me that what they read and what they see that I’m doing has inspired them to be healthier, has inspired them to leave a bad situation, to build strength.”

But when the parent of one of Jensen’s students came across her modeling photos, she reported it to the school, calling it “immodest” and “pornographic.”

After the revelation, Jensen says the school gave her three choices: “make the post private, take them down, or be fired.”

But the district tells a slightly different story.

North Sanpete School District takes our responsibilities very seriously… We received some complaints from parents who viewed one of our teacher’s personal Facebook page that contained images of the teacher the parent found problematic… We investigated and spoke to the employee—as we do with all of our employees—about maintaining appropriate images on public websites where they are role models in the community and for our students. The teacher was very cooperative and removed the more objectionable material.

As for the claims that her job was threatened, the district says that no such thing occurred: “The district has NOT given the employee ultimatums regarding her personal use of social media and the District has not threatened her job in any way.”

The statement also says that the district networks and devices will block “questionably appropriate content,” and is also training parents to help parents police their children’s social media use.