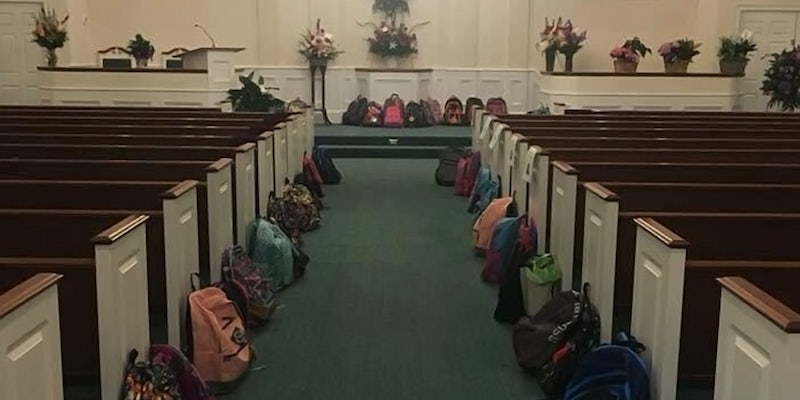 Teacher’s final request: School supplies instead of flowers at funeral

The teacher’s final selfless act has inspired people across the internet.

Georgia teacher and paraprofessional Tammy Waddell had an unusual request in her obituary: Instead of flowers, she wanted people to bring backpacks full of school supplies to her funeral.

When Waddell passed away on June 9, at the age of 58, she left a legacy of 30 years of working in Forsyth County Schools—a legacy that has now been spread widely across the internet, thanks to a picture posted by her cousin, Dr. Brad Johnson, on Twitter.

Speaking to BuzzFeed News, Johnson said of his late cousin, “She always felt a bond to students in need, whether they need[ed] supplies or a hug. [And] she thought they needed backpacks more than she needed flowers.” The obituary not only asked for backpacks to be brought to Waddell’s funeral but also asked for donations of school supplies to be made to Project Connect at Forsyth Central High School in her memory.

Johnson also took a picture of the around 100 teachers who had been colleagues of Waddell. The teachers were also honorary pallbearers, standing in a line with the backpacks from the door of the funeral home to the hearse.

The obituary says of Waddell, that she was recognized by those around her “by her generosity, selflessness and unconditional love.” The impact Waddell had is clear in the many people who came to her funeral, and in the online guestbook, originally full of notes from family, friends, former students, and their parents. Now added to the chorus of people fondly remembering Waddell are strangers who never met her but have been touched by her selfless funeral request. “Her final lesson has literally inspired the world,” Johnson said to BuzzFeed News.

An accomplished teacher, Waddell had been recognized as Forsyth County Schools Elementary Teacher of the Year and had also volunteered for the Forsyth County Volunteer Fire Department and worked with the Rainbow Girls.

“Though her achievements and accolades are numerous, none are greater than the many lives that she changed over the course of her three decades in education,” her obituary reads.