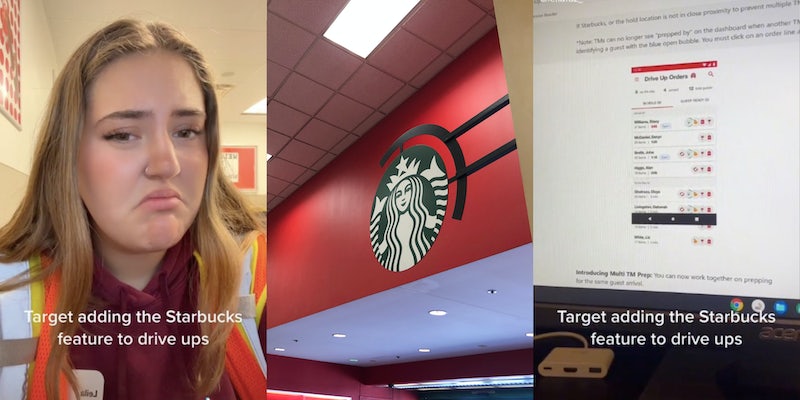 'Imagine being the understaffed baristas.'

Target left one employee without words after she found out it added the option to order Starbucks when shopping via the store’s curbside drive-up service.

TikToker Leila (@leilafaz_) posted a video to the social media platform to vent about having the Starbucks drive-up feature added to her work duties. The video amassed over 129,000 views since it was posted on Oct. 2.

@leilafaz_ Boutta quit fr, We already struggle daily with how it already is now they wanna add this bullshit and make it harder for us. Its going to be literal hell for us and the customers are going to get lazier and more rude when something doesnt go their way. This aint right i need a raise. #FYP #foryou #target ♬ kickin back – ✿

In the clip, Leila appears on camera looking worried with text overlay that reads: “Target adding the Starbucks feature to drive ups.” She lip-sync to the audio playing in the background, mouthing the words, “I’m kickin’ back, and I’m good.” But clearly, she is not good.

The drive-up Target employee flips the camera to her computer screen, which shows a ton of “Drive Up Orders,” and then she shows all the drive-up Starbucks orders customers placed.

“Boutta quit fr,” she wrote in the caption. Leila added that Target employees already struggle with their existing workload, and now “they want add this bullshit and make it harder for us.” Target has been called out as a tough place to work at several times on TikTok.

The TikToker also explained that she expects Target allowing customers to add Starbucks orders to their drive-up will not only make life more difficult for Target employees but that “customers are going to get lazier and more rude when something doesn’t go their way.” Since the pandemic, the New York Times reports that there have been increasing rates of rude and entitled customers, with workers having to put up with unacceptable behavior. “People are always rude to restaurant workers, but this far exceeds anything I’ve seen in my 20 years,” one woman told the publication.

Leila ended her caption by saying, “I need a raise.” Most of the viewers in the Target employee’s comments sympathized with her. “Target drive up is the BEST! Thank you for all you do! I agree adding Starbucks is totally unnecessary!” said one user. “Oh that’s gonna be horrible,” one person said, agreeing with Leila that customers that customers would likely abuse the feature. “I could already imagine them saying the drink isn’t right to YOU instead of the sb workers.”

Others pointed out that Starbucks workers are already understaffed, and this new feature would likely make the situation worse. “All the Starbucks by my target have literally one person working,” one Target regular said.

“Imagine being the understaffed baristas,” said one person who allegedly works at Starbucks, adding that the coffee franchise doesn’t allow workers to turn off the online ordering feature even when the store is understaffed. “I’m DREADING next week. They won’t let us turn it off even if there is only one person working,” they said.

But some viewers, especially busy moms, were thankful for the Target drive-up’s new Starbucks feature and explained their reasons for using the service, while also showing gratitude to the workers for their dedication. “Thank you for doing the drive up!! When my daughter was an infant it was a literal life saver so I really can’t thank you enough,” one said. Another explained that with “3 kiddos and one who is disabled,” she uses drive-up a lot. “If my target does this…I’ll be forever grateful! Thank y’all for what you do!!!!!”

The Daily Dot reached out to Leila via TikTok comment and to Target via email.