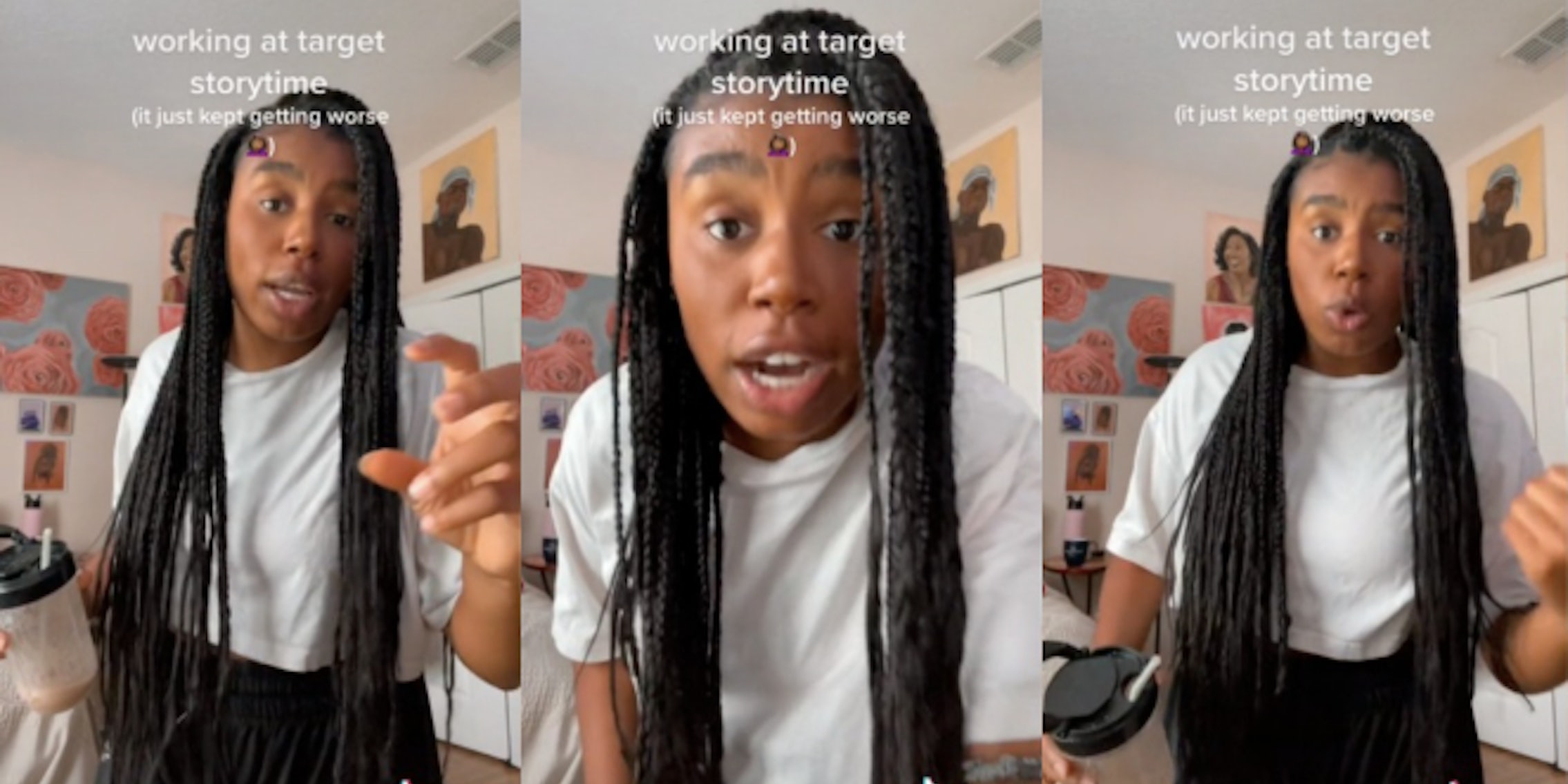 ‘If you ever want to work at Target, just know you have to be built different’: Worker says she was given ‘F’ for workday after only receiving 1 day of training

'They trained us for one day on the floor.'

In a viral storytime video, a TikToker says working at Target mentally and emotionally “wrecked” her as she warns viewers: “You have to be built different” to work at Target.

TikToker @.kierstenh details a shift at the Target store she worked at in a video that received over 1.8 million views.

The TikToker says that she was part of a group of 20 new hires and that she received just one day of training before she started work on the floor. She describes feeling lost and says she “did not know what [she] was doing.” She says she decided to jump into the challenge and “work as hard as [she] could.”

@.kierstenh It may have just been my target but😭#storytime #talk#blacktok#conversation #foryou ♬ original sound – Kiersten

She says one of the first tasks a Target worker is supposed to do at the beginning of their shift is called “zoning.” Zoning is when “you push all of the product to the front of the shelf so it looks pleasing to the eye of the customer,” she explains. The TikTok creator claims that she zoned the section of the store she was assigned to that day, but her team leader came up to her and asked why she was so behind in her work.

The TikToker says she appeared stunned, saying she was working as hard as she can. She says the leader also accused her of zoning the section incorrectly.

After this, the TikToker says the leader had a store manager and another team leader watch the TikToker as she worked. She says that she was also called over and told that she was behind in her work and that she needed to “pick up the pace.” However, she recalls pointing out to upper management, “’Y’all keep pulling me aside and stopping me from working to go back and zone an area that’s already zoned. … If y’all let me go work I can go finish.’”

She says that she was kept working at the store until around 1am, but before she went home, the team leader called her into an office and informed her that she was going to get an “F” for that day’s performance. The TikToker says she was told she needed to “start doing better.” @.kierstenh ends the video indignantly asking, “So we’re grading people now?”

Viewers were not shocked by @.kierstenh’s story, and they shared their own stories of working at the retail giant. Many pointed out issues with their own managers.

“I got bullied by HR and the store manager. Never was trained on register. Also got in trouble when they kept pulling me away from my area,” one user said.

“A new manager tortured me sm, they expected me to finish 3 full palette of beauty truck BY MYSELF and got mad at me because I couldn’t,” another said.

This isn’t the first time Target has been accused of overworking its employees. A 2020 article from the Guardian details how the chain allegedly increased employee workloads while reducing hours after the store increased their minimum wage. The retail chain is also known to cross-train its employees. Cross-training is a company practice that allows workers to work across different departments, but this can lead to them feeling overworked and under-appreciated.

One user described their time working at the store, saying, “Wroked at target for 3 years specifically at style/softlines & was cross trained to multiple areas. Got burned out real fast bc of it.”

However, some pushed back against the notion that Target was a bad place to work at. “I’m sorry but not all targets are like this I work at target currently and it’s the best job I’ve ever had,” one said.

“My target experience is actually very good I was trained for 2 weeks the manager are very chill and no one cares about style at mine,” another wrote.