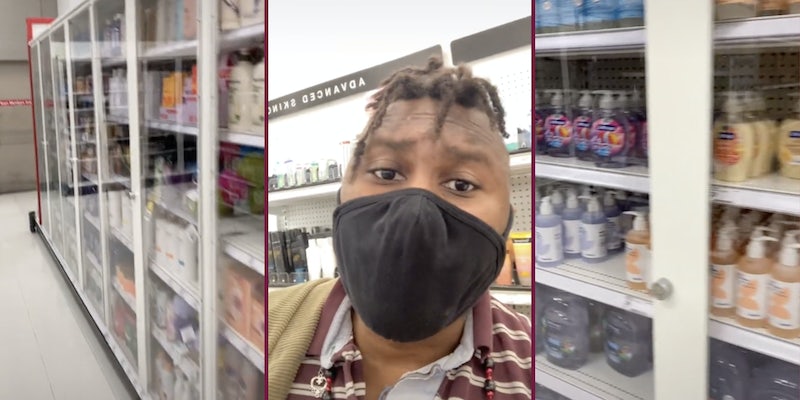 ‘This is not security, it’s merely just evil’: Customer calls out Target for locking up hygiene products

'Not only is it wrong but now your shopping trip is 2 hours long waiting for the one person with the key.'

A Target customer called out the store for locking its hygiene products up in a policy that he says discriminates against poor people.

A TikToker who goes by Frustrated Black Leftist (@sanctumrelic) took to the platform to express his thoughts about Target’s practice of locking up products.

“This is not security it’s merely just evil,” the customer claims. As he pans the camera around an aisle of locked toothpaste, soaps, and shampoos, the TikToker says that by employing this policy, Target is “taking part in what I would consider to be economic violence” against poor people.

He argues that “if people can’t afford to buy things like to keep themselves clean, or to keep their babies clean, or medication,” stores should be more sympathetic. “Instead of creating economic barriers for them or like locking shit up, maybe we need to pay people living wages,” he concludes.

“But these displays are not security, it’s just violence against poor people,” the TikToker said as he ends the video.

Viewers took to the comments to express their own thoughts about the practice of products being locked up by drug stores.

Most viewers seemed to think that from a customer’s standpoint, Target’s practice only created an inconvenient shopping experience and didn’t do much to deter allegedly poor people from shoplifting.

“Not only is it wrong but now your shopping trip is 2 hours long waiting for the one person with the key,” said one viewer.

“There’s no way that they make more money by locking this stuff up. It’s huge barrier to purchase. I just walk right past these items,” said another.

One person brazenly claimed that they simply take the items they want anyway. “Walmart does this here and I just open it up and set off alarms. I don’t have time to ask permission to buy an item,” they said.

One viewer pointed out, “Also it’s only in *certain* stores,” referring to the many instances in which Target and other stores have used racially targeted anti-theft devices not to deter poor people but on products frequently used by people of color, like on the darkest shades of make-up or on certain hair products. According to Business Insider, Walmart stopped the practice after the company was accused of racial discrimination.

“It would be interesting to map the locations where they have done this vs the store they haven’t done it,” suggested one viewer.

Forbes reports that the practice of locking up products has become increasingly common not because of poor people but due to an increase in shoplifting and coordinated attacks by thieves that target stores to steal in bulk. However, viewers who allegedly work at stores like this said that even if they saw someone stealing, they would be unlikely to intervene.

“Worked at a CVS and my rule was: if I saw someone stealing something for a baby, no I didn’t,” said one comment, which was liked by the creator.

“I used to be a manager at a store that sold baby onesies that had security stickers on them. I deactivated all of them, in front of the cameras,” said another.

The Daily Dot reached out to @sanctumrelic via Instagram direct message.