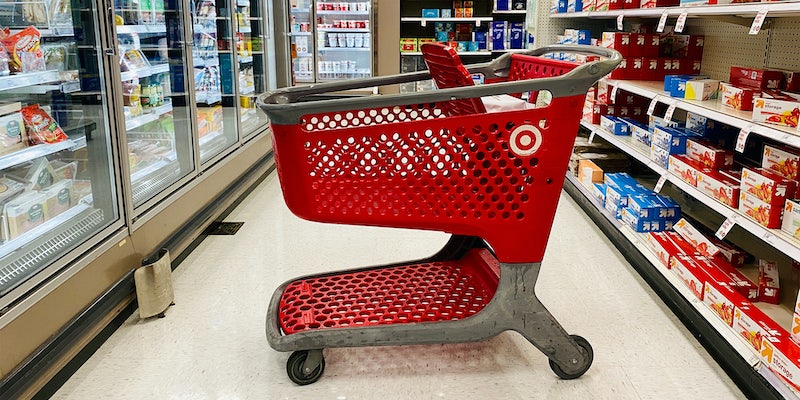 ‘This is my biggest pet peeve and why I almost always do curbside’: Target shopper issues PSA regarding customer cart rules

'90% of the time they don’t even look when they leave the aisle.'

A Target shopper went viral on TikTok after issuing a public service announcement on the platform regarding shopping etiquette.

While walking through Target with her cart, user Carrie (@cheesybu) urged fellow shoppers to follow certain rules while navigating the aisles.

Like driving, Carrie claims that the person walking down the main aisle should have the right-of-way, and the other shoppers in individual aisles have to wait for the person to pass. Those customers should look before they enter the main aisle.

She adds that she made the video “because a lot of people just don’t seem to understand how to shop.”

“This is my biggest pet peeve and why I almost always do curbside,” Carrie wrote in the caption.

@cheesybu This is my biggest pet peeve and why I almost always do curbside. #PSA ♬ original sound – Carrie loves cheese

The video has been viewed over 86,000 times since it was posted on Sunday, resonating with people in the comments section. Many of them added to Carrie’s point.

“And keep right at all times. Check your surroundings before stopping. C’mon peeps,” one user wrote.

“Yes!!! And OMG don’t stop in the middle of everyone,” a second added.

“Not only that but when someone walking in front of you stops because they see someone they know and they clog the isle and talk for 30 min,” a third said.

Carries responded to the comment, “Everyone should be aware, yes. But it absolutely is on the people who are coming into the main aisle and barrel into others.”

Other viewers shared their own shopping pet peeves.

“My biggest pet peeve is people who park their cart on the right side of the aisle while looking at something on the left and block the whole damn aisl,” one person stated.

“90% of the time they don’t even look when they leave the aisle. And don’t get my started on people that block the entire aisle,” a second shared.

“And the direction that the traffic is moving in! I hate when someone comes walking down the opposite way and everyone has to scoot over to let them,” a third vented.

The Daily Dot reached out to Carrie via TikTok comment.