Will the latest effort to flush the ‘tampon tax’ actually work?

A new campaign aims to strike down the sales tax on U.S. menstrual products.

Most women would agree that our monthly periods are anything but a luxury. So why are they taxed like one?

Countries all over the world apply a tax to the sale of tampons and other feminine hygiene products; in addition, 40 out of 50 U.S. states also apply the tax. The so-called “tampon tax” can be anywhere between four and nine percent, which adds up over time for women struggling to make ends meet. There have been a slew of efforts to get lawmakers to consider ending the so-called “tampon tax,” with Canada successfully removing the tax this July.

The latest stateside effort to shed the “tampon tax” comes from Cosmopolitan, whose November issue spotlights the modern period. When editors learned about the tax in the course of their research, they decided to take it up as an activist cause.

“When we told her [Editor-in-Chief Joanna Coles] what we found out about the sales tax, she was up in arms about women having this extra financial burden put on them when we already earn 78 cents on the dollar,” Cosmopolitan senior editor Danielle McNally told the Daily Dot.

Cosmopolitan launched a Change.org petition to address the injustice:

For anyone who has a period, these items are a necessity—not an option, not a luxury item—and should be treated as such. Eliminating the Tampon Tax is simply the FAIR and EQUAL thing to do.

Change is possible! This summer, Canada made history when its Parliament voted unanimously to eliminate a national tax on menstrual products. Across the pond and down under, women in the U.K. and Australia are insisting their governments do the same. A global movement is underway!

Feminist icon Gloria Steinem has even used her influence to raise awareness about the tax:

Other efforts to stop the “tampon tax” have happened recently in the U.K. and Australia. Earlier this year, an Australian college student Subeta Vimalarajah called on her country’s government to repeal the tax on pads and tampons in a campaign that garnered over 100,000 signatures. She gained traction after asking Treasurer Joe Hockey whether he thought the tax was fair at a Q&A in May. 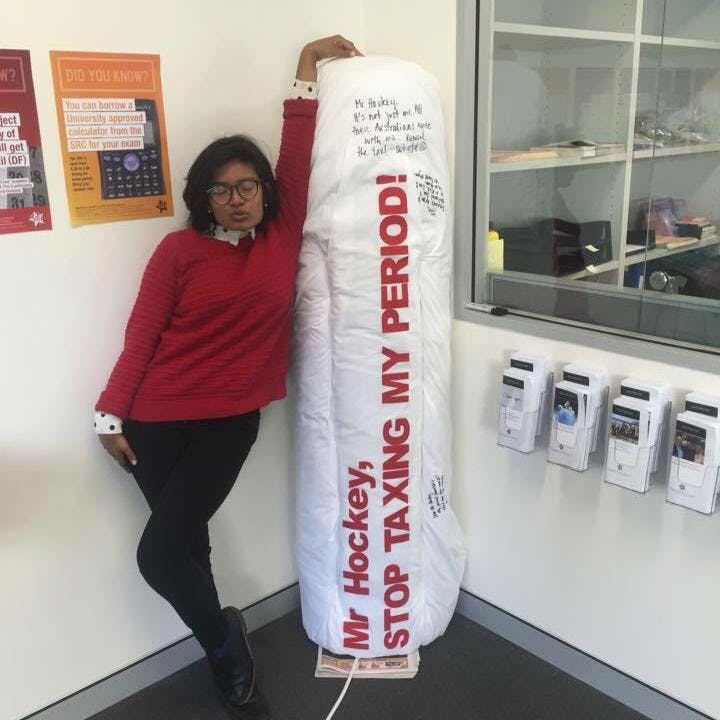 “Mr Hockey, do you think that sanitary products are an essential health good for half the population?” Vimalarajah asked. And when Hockey replied that he did think they were essential, she followed up about whether or not the tax should be repealed. “It probably should, yes, the answer’s yes,” he said. Yet despite Hockey’s best efforts to get the tax repealed, he was ultimately unsuccessful. The Australian government found that it would lead to a $22 million annual loss, and voted against the measure in August.

A more recent Change.org campaign in the U.K. is looking hopeful, with nearly 250,000 signatures and counting. It calls on Prime Minister David Cameron to put an end to a tax on sanitary products. The petition states:

We need to know why the Government still taxes sanitary products on luxurious, “non-essential” grounds, but not helicopters, the maintenance of our private jets, or crocodile steaks. If you value the functioning of those who menstruate at least as much as you enjoy your flying crocodile Fridays then sign our petition and join our campaign. Help to put an end to the marginalisation of issues traditionally associated with women by demanding a zero tax rate for sanitary products.

The campaign has gotten the attention of Labour Party leader Ed Miliband who called the tax “ridiculous” in a recent interview. (In a sign that the issue has entered the mainstream in the U.K., a group of women made an elaborate video spoofing Taylor Swift’s “Bad Blood.”)

Back in the U.S., individual states are taking steps to address the tax on sanitary products. New York State Assemblyman David Weprin told the New York Post in August that he’d like to sponsor a bill which would removes the sales tax from both toilet paper and feminine hygiene products. “This is about more than dollars and cents,” he said. “This is a quality-of-life issue. We have to buy toilet paper. Women have to use feminine hygiene products.”

Cosmopolitan said it did not have more specific plans to address the “tampon tax” other than the petition, which only had 1,300 signatures at the time of publication. “We want them [lawmakers] to know that we are serious about getting these laws changed,” McNally said. “We’re getting taxed for having a period, which means being a healthy woman.”