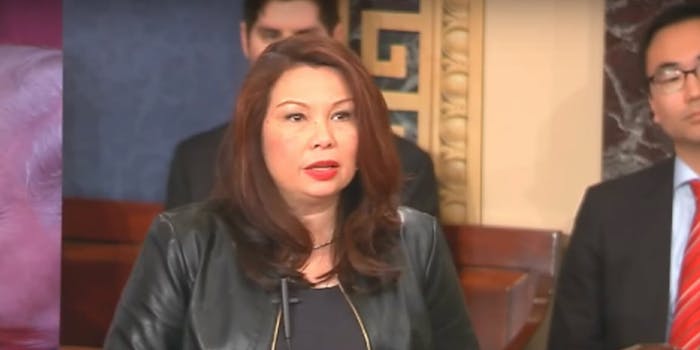 Sen. Tammy Duckworth will be the first sitting senator to give birth

Her second daughter is due in April.

Sen. Tammy Duckworth (D-Ill.) is pregnant, and she’ll be the first sitting senator to give birth, the Chicago Sun-Times reported Tuesday.

Duckworth, 49, is expecting to give birth to her second child—a girl—in late April. Only 10 members of Congress have given birth while in office, and all of them were serving in the House at the time. Duckworth will be the first senator to have a baby while serving in the chamber.

“You’ve got to keep working,” she told the Chicago Tribune. “But I’m healthy. I’m well-monitored, and the doctors say I’m doing just fine.”

Duckworth, a retired lieutenant colonel who served 23 years in the Illinois Army National Guard, lost both her legs when her Black Hawk helicopter was shot down in Iraq in 2004. She served two terms in the House for Illinois’ 8th Congressional District and became the second female U.S. senator elected in the state in 2016.

Duckworth had her first daughter, 3-year-old Abigail, while she was serving in the House.

Drawing from her experiences with Abigail, Duckworth has advocated for airports to provide places for breastfeeding mothers to pump milk; for the military to give personnel bonding time with their babies; and for students to have access to on-campus child care.

She is a sponsor or co-sponsor of multiple bills concerning infant and parent health, including affordable child care and paid parental leave, the Sun-Times reported. It is unclear how much time Duckworth will take for her own maternity leave after the birth of her second child.

New Zealand Prime Minister Jacinda Ardern, who identifies as a feminist, made waves last week when she announced she’ll be taking six weeks of maternity leave when she has a baby in June.

Duckworth told the Tribune “it’s about damn time” a woman will give birth while serving in the Senate.

“I can’t believe it took until 2018,” she said. “It says something about the inequality of representation that exists in our country.”