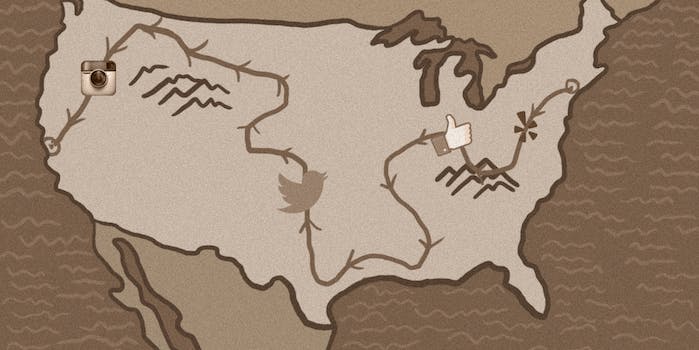 I wanted a real experience—without the digital filters.

I hadn’t seen another car in what felt like hours, so I tapped my phone as if it were an actual person sitting in my passenger seat, hoping to stir it awake for some company. But the sad little line through a circle where bars of service should’ve been was the equivalent of a passenger’s stubborn snore.

There was no reception on this quiet road in Montana, which weaved through tan hills dotted with dark evergreens and the occasional smattering of cows, and there hadn’t been for hours. I took a deep breath and turned off the crackling country radio station. Maybe some silence would do me good—or I’d completely lose my mind.

While planning my journey, I read Kerouac’s On the Road. It’s become cliché for good reason. With its jazzy rhythms and rambling, intoxicated excuse for a plot, the novel captures the wild and unpredictable vastness of our country, galvanizing countless road trippers, including myself. The random romances, the dubious characters he meets while hitchhiking, the way he finds a path to the next destination despite being constantly broke—all convinced me to undertake a cross-country adventure worth telling my grandkids about someday.

But I had many ways to experience and share my story that Kerouac hadn’t dreamed of.

Bourbon. I love you, #Kentucky.

Stumbled upon a rodeo in #Montana today. These kids are way cool. #rodeo

No messages. No Gchats. I was dying to use my voice.

Two girls leaned against the fence up front with long, blonde braids skimming the waistlines of their jeans. They hung their fingers through the chainlink, giggling and waving to a group of teenage guys across the sand, but halted their flirtations whenever a little cowboy began his charge around the ring. Not a single person was taking pictures of the action. Only watching.

I didn’t bother with directions when I returned to my car. The road ahead was a long one, and I still didn’t have service. By the time I’d spent several hours on that quiet road in Montana, I was willing my screen to light up with fear that I’d missed a turn at some point. The thrill of my surroundings had begun to fade into uncertainty. Where was I, exactly?

I was aiming for a city I’d picked on my fold-out map: Billings, Mont. The large font size suggested some hotel options. What would await me there? I couldn’t check Kayak.com, so I hoped for the best. And for a bar. I’d gone a long time without speaking to a fellow human being. No Facebook messages, no Gchats, and no real-life conversations. I was dying to use my voice, and not just to sing along with Top 40 hits on the radio.

A glimpse of what it was like inside my head today as I hiked in Glacier National Park…. "please no bears, please no bears, bear??? No bear… no bear… bear? BEAR! No. Phew. Please no bears…" this got much worse when I realized I was the only one in the park without bear mase and bear whistles. Those things exist?? #Montana

Maybe I wasn’t having a Kerouac-style adventure, but between the blips and bleeps of sharing my trip online, a new kind of story had been unfolding. And there was plenty more to come.

Britany Robinson is a freelance writer based in Portland, Ore. She’s addicted to quirky coffee shops and road trips without definitive destinations. You can follow her adventures at Stars on the Ceiling or on Twitter @Britseeingstars.