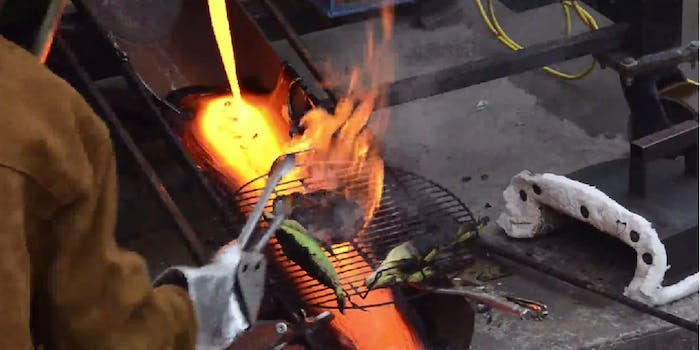 One dinner over a boiling lava pit and this British designer just had to make a DIY version.

What do you get when you cross a sculptor, an academic department, a designer with no sense of self-preservation, and a flowing river of balsatic lava?

We know it’s something of a cliche to want to be the guy on your block with the best grill, but this is a little extreme, even for us. British designer duo Sam Bompas and Harry Parr turned to sculptor Bob Wysocki and the Syracuse University to help them design the ultimate neighborhood barbeque: steaks grilled over an open plume of lava, heated to 2,100 degrees Fahrenheit.

Bompas told Slate that he got the idea for the lava pour after visiting Sakurajima, an active volcano in Japan. He spoke of the joy of cooking a meal over the open fire of lava, but also noted that he had to climb over the safety railings to do so.

If you’re thinking this might not be the guy you want to entrust with your home-cooked meals, don’t worry—the grill took place outside in relative safety. But Bompas and Parr also want to turn their unique dining experience into “bespoke lava banquets” for elite clientele. We don’t want to think about the inevitable “Lava banquet disaster” headlines in our future. Let’s all just watch the pretty, deadly synthetic magma flow.

The cookout was done as a collaboration between Bompas, Parr, and the university’s Lava Project, which they describe as “bring[ing] the spectacle and excitement of a volcanic eruption to Central New York.”

Basaltic lava, similar to that found on the seafloor and erupted from volcanoes in Hawaii and Iceland, is melted and poured to produce natural-scale lava flows.

Now we can add tasty charred sirloin to the list.