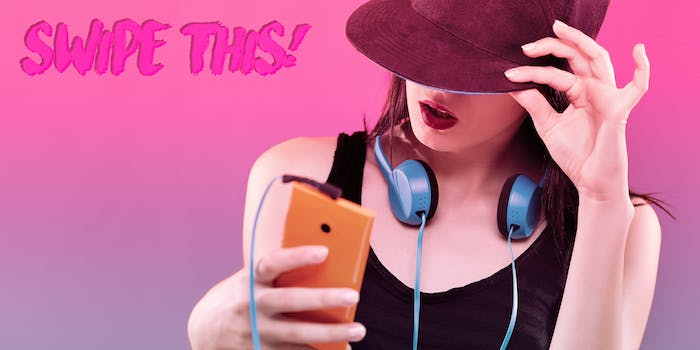 Swipe This! My ex-BFF keeps sliding into my DMs, but I don’t want to be friends

Is it better you show up for someone you don't like—or for yourself?

A few months ago, my ex-BFF started DM-ing me on Instagram. I wasn’t exactly thrilled to hear from her, but I would reply politely to the memes or videos she sent with a “Haha, thanks!” or “Oh cute.” I was hoping she’d take the hint and leave me alone. Instead, it’s the opposite. Now, she DMs me several times a week. She tags me on Facebook. She is basically asking me for virtual attention all the time and I don’t know what to do. Often, I don’t respond, but the messages keep coming.

I grew up with this person. We went to high school together. And there was a time when I thought of her like family. It was hard to imagine life without her, because we’d known each other for so many years. We went to separate colleges, but we stayed in touch and I was even in her bridal party (which was a total nightmare).

But the truth is, she was never a very good friend to me. Sometimes she said things that felt condescending and mean. Over the years, she’s put down my appearance—my hair and clothing—not to mention my life choices. I didn’t always know how to handle it, so there were times when I let it slide. But then, eventually, I told her I needed space. I said I didn’t feel like she really even liked me and that having that kind of friendship in my life felt unhealthy to me.

Since then, we’ve gone about our separate lives. She’s focused on being a mom. She constantly posts very beautiful happy pictures of her children and husband on Instagram. She also adds hashtags and inspirational quotes about her husband being a “real man” and her kids being “blessings.” I follow her, but I barely interact with her stuff, so I was kind of perplexed when she started reaching out.

I don’t feel like we have much in common, even though I am married now, too (so I guess we do have that, but I’d never post the way she posts). I want her to leave me alone, but when she says, “Let’s catch up!” sometimes I say I’m so busy and that I’ll get back to her soon. And now I’m starting to feel extremely guilty about avoiding her. Which confuses me. She has never supported me the way I supported her. So why do I feel so bad about dodging her DMs?

Best Friend (But Not) Forever

Dear Best Friend (But Not) Forever,

Depending on your disposition, this might feel freeing. (Woohoo! I don’t have to please everyone!) Or it might completely freak you out. (Oh no! Does everyone hate me now?!) But it remains a fact. You do not have to like everyone, and everyone does not have to like you. And there is simply nothing you can do about it.

But this truth gets distorted all the time. Especially on social media where people who don’t like each other almost constantly “like” each other, and many of us become adept at posting things that will be liked by many. I’d be willing to bet good money, that right now, at this very moment, someone, somewhere is liking a post that was posted by someone who they like very little, or possibly not at all.

I wonder how often you’ve been that person. You seem like someone who is generous to a fault. And I can imagine that you often dole out support, not because it’s earned, but because you know people need it to get by.

You also strike me as someone who is brave enough to tell the truth. When I read your letter, I was stunned that you had actually told your friend that you sensed she didn’t like you. It is rare for people to have such honest dialogues. And I think it’s commendable that you were able to step away from a relationship that, while steeped in history, had become much too hurtful.

So what happened? You walked away and now your friend is back, forcing you to recreate the same boundary. Hm. In my book, that’s not very nice.

But OK, let’s play generous. Time passed. And I’m guessing your friend, who was not a very good friend, started to miss all the ways you were good to her. Maybe her life is more lonely than her Instagram feed suggests. Maybe she felt regret about how she treated you. Perhaps she started to wonder if you ever liked her at all. Maybe she developed an interest in healing an old wound. After all, it’s painful to lose a friend! So she reached out hoping to reconnect, and now, given your tepid response, maybe she feels rejected. Ouch. Poor thing. She keeps on trying.

And now you hold her fate in her hands. Do you save her from her suffering? No, you just keep dragging it out. Stringing her along. Gosh. What a lousy friend you’ve become.

Except that isn’t what happened, is it? Ultimately, nothing you’ve described tells me your (ex-)friend is someone who is willing to reflect and repair. She hasn’t owned her behavior or acknowledged your needs. Instead, she breezed past a boundary to get her own needs met, regardless of the cost to you.

You could argue that her intentions are good, but I’d wager that they’re just as selfish as ever. In short, she wants to know that you still like her. That you are available to her. That she hasn’t lost a very valuable friend.

Anyone who’s lost an old friend knows that experience can be painful. But my sympathies do not lie with your ex-bestie, they lie plainly, and only, with you. I don’t feel bad for anyone who was a lousy friend, who belittled someone’s appearance and choices to the point that they ultimately lost them. I do, however, feel bad for people whose empathy is so vast, so brazen, that it tests them and tricks them into thinking it might be best to blur their own boundaries if it means someone else gets to feel a little more loved.

I realize you grew up with this person. And that can create a certain sense of duty or obligation. Some friends are like family. And certainly, social norms teach us that old friends who knew us way back when are very, very special. But guess what, even the oldest of friends don’t get to mistreat you for years on end and then expect you to be there for them down the road. Friendship is not a contract; it’s a choice. And right now, you have a really big choice to make. Are you going to choose yourself and your well-being and happiness? Or are you going to choose a very self-serving friend?

I don’t think you’d be wrong to ignore her. Or unfriend her. Or even to block her. As far as I’m concerned, you don’t owe this person anything, and if you did, haven’t you already paid her in time, energy, and friendship in years past? If anything, it sounds like she is the one who owes a debt to you.

So why do you feel guilty?

Well, guilt is usually tied to shame. So something about this exchange is making you feel that you are bad and wrong. And I assure you, you are not.

I’m guessing that somewhere along the way you learned there is value in caring for others. And you wouldn’t be wrong. As humans, we need each other. Perhaps you also learned that this is where your worth lies—in giving and supporting and being endlessly forgiving. And I’m sure it’s one part of what makes you so wonderful. Maybe you’ve learned that self-sacrifice is OK, but failing to show up for others is not. Maybe you’ve built an identity that you thought was rooted in kindness, but is actually rooted in always putting others first. Perhaps it’s time to ask yourself who you are when you stop playing the best friend and the caretaker. How do you feel about yourself then? People who give a lot are often reluctant to give to themselves, and I wonder if, now that time has passed, revisiting a situation where you withdrew care is making you feel a little less worthy, a little shaky and insecure.

I also wonder if it’s uncomfortable to admit to yourself that, as much as you suspected your friend “disliked” you, you’ve actually come to the realization that you don’t like her. From what you’ve described, you see this person as shallow, unkind, and frankly, boring. Her messages don’t interest you. Her life doesn’t either. Is that OK? Are you, in turn, callous or shallow, or harsh because you dare to dislike someone? Are you allowed to see a person at face value and not dig deeper and search for a kernel of redemption at their center?

As I said above, people often play nice with those they dislike. We pretend to like with smiles and praise and digital nods of support. Why do we do this? Possibly because we believe there is some social value in maintaining connections with folks who may not float our boats. If you’re part of a shared community with someone who isn’t exactly your favorite, you may think it’s best to “make nice” online just as you would at a social gathering. But, possibly, we do it because of our own hunger to be “liked.” Many people are willing to make shows of approval in the hopes it will be returned.

But here’s the thing: If the support, approval, and praise you get are always transactional, they’re not worth much at all. And it’s costly to function this way. Think of how much energy you spend when you run around trying to please people who do not please you. Think about how much time you waste when you set to wondering who likes you back.

If you want to tell your friend how you really feel, yet again, you have every right to. But I think you’d do best right now to think of your time and affection as extremely precious, because it is. It is not a currency or a tool with which to barter, but it is deeply valuable and it should be treated as such. And other people treating it as valuable starts with you. You get to choose who you share your wonderful giving heart with. You get to exercise your discretion. At first, this kind of boundary work may feel shaky. But with time, I think you’ll find it makes you feel stronger, more powerful. It feels much better to give love and support from a place of a true desire to give than it does when you give from a place of guilt or obligation.

So, before you make that obligatory “catching up” phone call, or send another apologetic text, take some time for quiet and think about what would make you happiest. Give yourself the kind of friendship and support that your ex-bestie could not. Because, as cheesy as it may sound, you’ve got to be your own best friend, forever. The one ride-or-die who’s going to be by your side no matter what for the duration of this thing called life is you. And you owe it to yourself to show up.