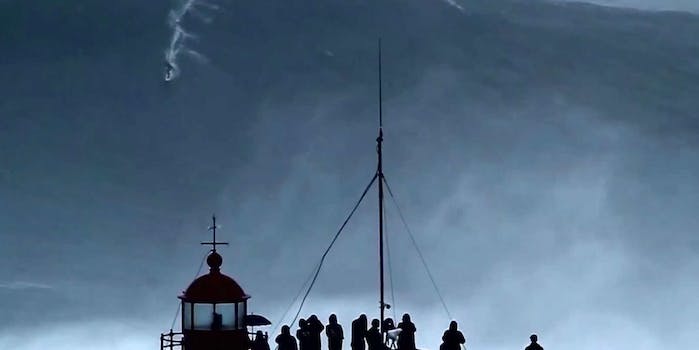 Here's a ride to recount around the beach bonfire.

Surfers, as is evident from talking to them for more than a few minutes, are always after “the big one,” that legendary wave that puts the fear of god into mere mortals. It was with this goal in mind that a Brazilian crew traveled to Nazaré on the Portuguese coast, home to some truly towering walls of ocean—with one among them catching a potentially Guinness Records-worthy ride.

Carlos Burle had been out in the water all day, biding his time. “It was luck,” he said of his jaw-dropping ride later on. “We never know when we will be catching the wave. I still hadn’t surfed any wave and everyone had already had their rides. Maya [Gabeira] almost died. For me, it was a big adrenaline moment to get back there after what happened.”

What happened was that the killer St. Jude storm, which has been lashing Northern Europe in recent days, gave rise to waves nearly 100-feet high—well taller than the 78-foot wave caught in 2011 by Hawaiian Garrett McNamara, who currently holds the world record for the biggest wave surfed. Guinness will now set about confirming that Burle indeed raised the bar, but have a look for yourself and you’re liable to be impressed either way.