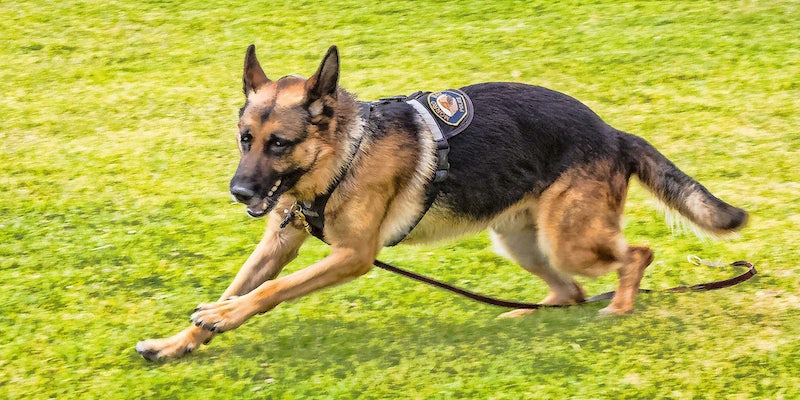 Photo by SLO Coast Dogs In The Fast Lane/Flickr (CC BY 2.0)

The issue is whether the sniff adds time to the stop, the court says.

It’s unconstitutional for police to hold suspects during traffic stops without probable cause, the U.S. Supreme Court has ruled.

The 6-3 decision means that police are no longer allowed to force a stopped driver to wait for a drug-sniffing dog to arrive to inspect the vehicle. Extending the stop by even a few minutes violates the Constitution’s shield against unreasonable seizures, the court ruled.

“Police may not prolong detention of a car and driver beyond the time reasonably required to address the traffic violation,” Justice Ruth Bader Ginsburg said on behalf of the court.

The case, Rodriguez v. United States, arrived at the high court after a man was pulled over in Nebraska and issued a citation for erratic driving. A police officer forced him to wait “seven or eight minutes” until another officer walked a drug dog around his vehicle.

Rodriguez was found to be in possession of methamphetamine; however, the Supreme Court ruled that the search of his car was illegal, therefore the evidence gathered against him is inadmissible at trial.

“The critical question is not whether the dog sniff occurs before or after the officer issues a ticket,” the court added, “but whether conducting the sniff adds time to the stop.”

If police do want to bring in a drug dog to search your car, we’ve created a guide that explains exactly what to do. And since you should be seeing fewer drug dogs in real life, you might as well look at all these badass police dogs from Instagram:

Photo by SLO Coast Dogs In The Fast Lane/Flickr (CC BY 2.0)