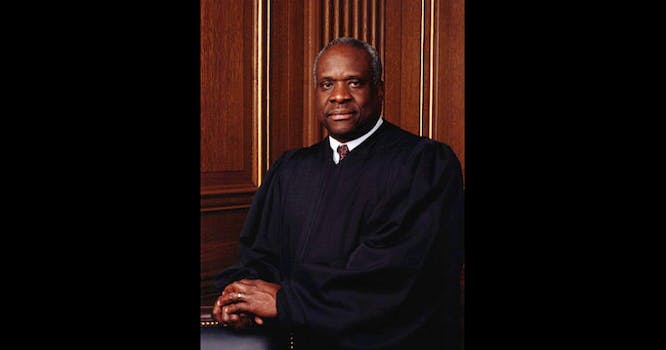 Clarence Thomas breaks with conservatives to rule against racial gerrymandering

The ruling will likely influence gerrymandering litigation across the South.

On Monday, the Supreme Court found that North Carolina had unconstitutionally gerrymandered two congressional district maps on the basis of race, ruling that race cannot be used to draw district lines unless for a “compelling reason.”

With Justice Neil Gorsuch abstaining (the case was heard before he was confirmed), the swing vote came somewhat surprisingly from conservative Justice Clarence Thomas, who sided with the four liberal justices in a vote of five to eight. However, those who follow Thomas’ rulings would know that he has voted against racial gerrymandering, whether to the benefit of Democrats or Republicans, since the 1990s.

In the recent case of Cooper v. Harris, the two district maps in question had grouped a large majority of the black population in one district and few in the other, in turn diluting the votes in the second.

“The Constitution entrusts states with the job of designing congressional districts,” Justice Elena Kagan wrote in her majority opinion. “But it also imposes an important constraint: A state may not use race as the predominant factor in drawing district lines unless it has a compelling reason.”

In the past, North Carolina argued that gerrymandered district maps were drawn in order to comply with the Voting Rights Act, which requires legislatures to consider race in district line decisions. SCOTUS ruled in 2001 that gerrymandering is permissible if done along partisan lines, even if race and political parties are synonymous.

But now Monday’s ruling will likely serve as a basis for gerrymandering cases across the South, and will help plaintiffs prove that states unlawfully redrew districts.