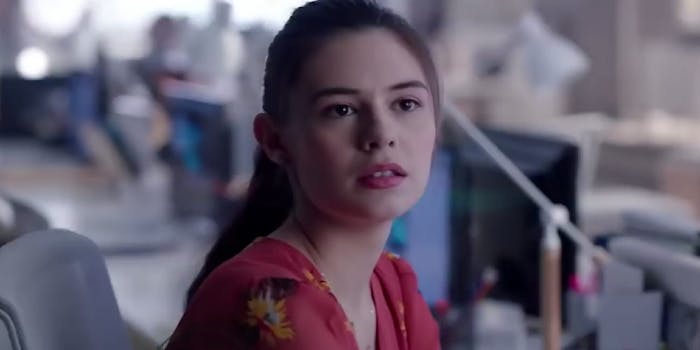 In a first for TV, the CW’s Supergirl now has a transgender superhero. Nia Nal, better known as Dreamer, debuted this past October and appears on the show as a reporter working alongside Kara “Supergirl” Danvers at CatCo.

For most Supergirl viewers, Dreamer’s trans status is a point of pride for the series, in part because trans actress Nicole Maines portrays her on the show. But not everyone is happy about Maines’ appearance and her character’s gender identity. Case in point, the Washington Examiner published a piece claiming Supergirl has a trans woman on the show “just to be ‘woke.'”

“This effort to cast a transgender character in a main role on a popular show for kids is a blatant attempt to normalize a movement,” writer Nicole Russell says in the post. “This not only fails to represent the majority of children’s experiences, but attempts to indoctrinate them at an age when they are the most impressionable.”

Of course, the Washington Examiner’s take is incredibly transphobic. Russell acts as if Supergirl is indoctrinating children and fails to acknowledge the fact that trans children are out there and real. Likewise, she also attacks Maines by unfairly claiming she has “few acting credits to her name,” as if Supergirl chose the actress solely because she’s also an activist.

“If children watch shows like this without interacting with adults about it or observing it with critical reasoning skills, they could end up more confused than inspired, more frustrated than encouraged,” Russell concludes.

Twitter quickly fired back, pointing out that the show has a trans woman… because trans women exist in the world and deserve representation.

supergirl isnt geared to kids. even if it was, its pathetic that having a transgender character bothers you. but frankly the same people complained when it was a gay character. or a black character. you're just bigoted haters who will be left behind in the dustbin of history. https://t.co/HaImHTbZho

bold of you to say that when trans people actually exist and superheroes don't https://t.co/t4yhrBMiAM

Maybe it has a trans character because those people exist

bold of you to say that when trans people actually exist and superheroes don't https://t.co/t4yhrBMiAM

Maybe it has a trans character because those people exist

You actually don’t need a reason to have a transgender character on your TV show.

Trans people should be on your show simply because trans people exist. https://t.co/8vNZjfdFs2

Worried about realism projected to children? Guess what, there are more trans gender people in reality than superheroes.

Then there’s the Examiner’s cringey usage of the word “woke.”

So a Transender person existing is "woke"? Fuck you, dickhead.

My life has a transgender character. Guess it wants to be “woke” too.

Not to mention, there’s tons of queer and trans kids out there that want to see trans representation on TV. It’s not like trans children are a myth.

The “indoctrination of kids” argument is so specious, Boeing and misses the point: queer kids *exist*

Adulthood didn’t make me queer. I was always queer. And I deserved queer characters to see and root for, too. I’m glad trans kids can see themselves in a superhero show. https://t.co/dEqiUn4gNg

“we must not validate the experiences of dysphoric children should they grow up to be themselves in a more safe and accepting society” TRANSGENDER HUMAN BEINGS EXIST GET TF OVER IT https://t.co/fVnZOISiml

1) Supergirl's demographic probably decreased because The CW is a smaller network compared to CBS.

2) There is nothing wrong with fiction being more inclusive.

In short, throw this piece where it belongs: in the trash.

Here's where this article belongs… pic.twitter.com/ATBC5Tldig