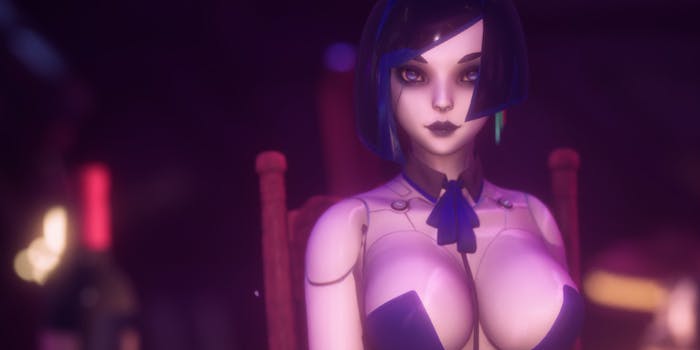 It's popular, but it doesn't hold up to the hype.

It’s finally here. One of the most hyped up (and controversial) adult video games in PC gaming history is available on Steam: Studio FOW’s Subverse.

The game, which launched in early access on March 26, raised approximately $2.3 million over Kickstarter in spring 2019. Games journalists compared Subverse to an adult take on Bioware’s space opera role-playing game Mass Effect. Based on my time with the game, it’s mostly an apt comparison.

Subverse casts players as the Captain of the Mary Celeste, piloting an enormous starship freighter souped up with a stealth drive and faster-than-light travel capabilities. Players lead a growing rebellion of lewd crewmates against the Imperium, a galactic empire obsessed with its deeply conservative state religion, the Veil. The Veil, in short, emphasizes unity through sexual purity, which it turns out is a great way to assert dominance over others.

The Imperium isn’t exactly popular, but it’s powerful, so the Captain must recruit an eclectic mix of well-endowed female companions to help with the ordeal.

A mixed voyage into the unknown

Subverse’s early access release is split into episodic chunks. The first part, which released on Friday, includes all of Act I and the start of Act II. This involves an open-world nebula-wide romp fighting back against a molerat-like pirate lord—and a very intimate introduction to the game’s first three female companions.

Then there’s Subverse’s overarching sci-fi political drama. The Imperium is not just a big bad government but a Roman-esque empire hellbent on order and stability through any means necessary, including genocide. Deception, double-crossing, and hidden desires are prominent themes throughout the Imperium’s narrative segments, and the writing for these sections is interesting.

But Subverse’s greatest appeal is its women. They’re surprisingly deep characters, often showing tragic backstories filled with trauma, betrayal, regret, and internal conflict. Demi, the Captain’s onboard assistant, was an abusive pirate lord’s mainframe bot until the Captain rescued her and fostered a sexually anarchistic relationship with her. Lily, the busty xeno biologist researcher, is a former military sniper turned ethically questionable scientist. Pirate Queen Killision (or Killi) hails from a species obliterated by the Imperium and seeks vengeance on her kins’ behalf. Subverse’s voice acting is masterful, and its top-notch talent brings these characters to life.

Those details aside, Subverse is kind of a mess.

A side mission involves a purple-skinned Gordon Ramsey-looking alien shouting “IT’S RAW.” Another references Gearbox Software’s Randy Pitchford supposedly leaving a memory stick with underage pornography at Medieval Times (it remains unclear if the USB stick actually contained illegal content). These are all intended as a wink and a nod to Subverse’s core demographic: hardcore gamers and geekdom fans.

The end result is a game overseasoned with cultural references—to the point that the jokes sell the game’s writing short.

Sometimes Subverse’s sense of humor goes beyond cringe and into far darker directions. Jokes about “hookers” and “whores” abound in ways that aren’t friendly to sex workers. Many imply full-service workers are dirty, scummy, or desperate. In one scene, Demi invites Killi to hire sex workers from “New Japan” if she “requires a scatjob” to humiliate her enemy. The “Weird Japan” caricature is a common form of racist stereotyping that dehumanizes Japanese people and Japanese culture.

Then there’s the Fuccbots, a Borg-like sexually aggressive entity obsessed with discocore, “boipussy,” and ramming its pink phallic spaceships into anything that moves. The Fuccbots are a not-so-thinly veiled homophobic gag about gay male hookup culture. If the bit isn’t obvious, the true nail in the coffin is the Fuccbots’ logo: the trans symbol with a smiley face in the middle.

In a dinner segment, the Empress warns him to “keep your hands off the guests… as well as the rest of your anatomy.” Jokes about his obsession with cock continue throughout the game’s first two Acts, often played for laughs as the hypersexual gay male villain who just can’t keep it in his pants. In Subverse, hedonism is great unless you’re a queer man or a sex worker, in which case, no thanks.

All this shouldn’t be surprising based on Studio FOW’s history, one marked with controversy over racism and misogyny in its pornographic content and, more recently, a non-apology over a Subverse partnership with a far-right YouTuber. I suspect these controversies won’t hold back Subverse’s initial early access sales, but they may linger over the game as more troubled content surfaces over Subverse’s subsequent chapters.

A beginning, not an ending, for adult games

Subverse feels a bit like the games world’s Pirates. Just 24 hours after its release, the game was (fittingly) the 69th most popular game on Steam, beating out indie heavy-hitters like Hades, VRChat, and Loop Hero. That same weekend, Subverse topped Steam’s best sellers list globally. Its early access launch trailer reached 669 upvotes on Reddit’s r/Games by Saturday afternoon. Subverse has left an impression, like it or not.

My hope is that Subverse inspires disappointed players to look a little deeper into the adult games genre. There is phenomenal art coming from this world’s creators. If only players pull back the veil, seek beyond the hype, and set their standards a little higher than looping 3D animations and a gay robot shouting “boipussy.”