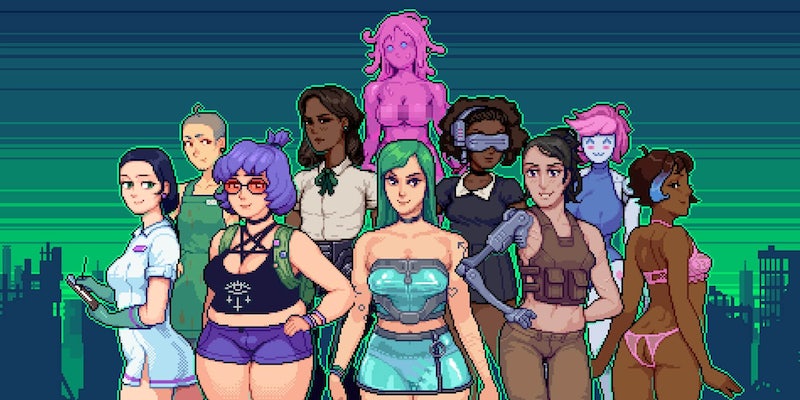 It’s late. I wander through a nightclub, hanging out toward the wall. In the front of the house, partiers across town dance together. I slip away into the bathroom, where I can faintly hear the thump-thump-thump of the nightclub as I peer into the stalls.

I’m not here to relieve myself, although someone in the stalls certainly is. A woman with her ass in the air is inviting my player character, an autonomous trans girl droid named HC, to fuck her. I oblige, but she warns me to make it quick; she really needs to pee.

So goes my first encounter in the latest build of Hardcoded, easily the most popular trans adult indie game yet.

Last June, I praised Hardcoded for Fanbyte, noting how the game embraces “sapphic desire between trans women” without shame. At the time, Hardcoded had over 2,400 supporters pledging $5,000 per month on Patreon; that number has since jumped to 3,400 offering $6,300. Now, developer Ghosthug Games is one of the top 20 adult games Patreons on the site. Hardcoded is a success story for queer adult indie game developers.

For co-developers Kenzie Wintermelon and Trix Royale, it’s also a baptism by fire.

“We are kind of learning everything as we go so sometimes progress can seem slow because we have new big ideas and it just takes forever to figure out how to actually implement them,” Royale told me. “But it’s incredibly rewarding when it all comes together!”

Wintermelon and Royale started working on Hardcoded in 2017, but the two have wanted to develop a video game together since they met in high school. Three years later, the two have responsibilities firmly in place: Royale helps with background animations and takes on some of the character quests, preferring to leave “the lewd things to Kenzie.” Meanwhile, Wintermelon works on the artwork, animation, programming, game design, and the other share of writing.

In an industry filled with internal politics and Twitter drama,Wintermelon and Royale are a wonderful example of how good friends can come together to create a project bigger than themselves.

“We’re at a point now where we kinda just work on our own stuff, like we each know the world and the characters and we can just add whatever we feel to the game,” Wintermelon said. “We come together to make sure everything is in-line with the main story and to establish lore and to plan that kind of large-scale stuff. But most of the work we each do is in the details.”

One of the most exciting additions includes the Slime Queen, a busty pink slime woman who yearns to “possess [a person’s] mind and body from the inside, and pilot their meat suit to the surface to experience human existence for a while,” Wintermelon said. In one scene, the Queen promises she can “ease your anxiety, your uncertainty. In the current Patreon-exclusive build, she “fucks HC’s brain with tentacles.”

The possibilities are endless with her introduction, she said.

“I used to stress super hard about what kinda things I could include without people getting mad at me? But I’m way more comfortable now, as anyone who’s played the newer mindfucking, piss, robo-guro, etc. scenes can probably tell,” Wintermelon said. “I’m relieved, because I feel like we have a lot of kinda vanilla content that could really use some balancing out.”

Hardcoded is certainly a monetary success, but it’s not the best reward for creating an adult game for the queer community. That honor goes to the fandom. Case in point, the Patreon-exclusive build hosted on itch.io for Hardcoded is filled with positive comments from supporters. The game’s Discord server has over 450 members.

“Especially since starting the Hardcoded Discord server, our audience is a much more present and apparent part of the [development] process. It’s honestly my favorite thing, like, I cannot understate how important they are,” Wintermelon said. “Not feeling isolated in relation to development stuff has made everything more vivid and attainable and like, real, yo.”

Hardcoded is still in active development, although players can access the latest build by pleging $1 or more to the game’s Patreon page. The game’s demo is free to try on itch.io.