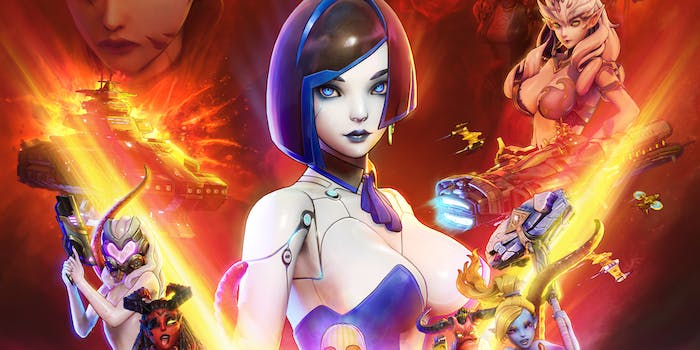 Studio FOW is the team behind Subverse, the adult games world’s highly anticipated adult video game. But after the team organized an exclusive first-look preview with YouTuber Arch Warhammer, the studio found itself in an intense (and apparently unexpected) controversy over Arch’s far-right politics.

Subverse is a tactical role-playing game where players explore the galaxy along with “the sexiest and deadliest waifus [they] can recruit.” Players enter the Prodigium Galaxy to fight back against “a bunch of puritanical, oppressive douchebags” in a mixture of open-world exploration, tactical turn-based combat, and plenty of 3D, animated sex.

From a gameplay perspective, Subverse looks to be one of the most immersive adult video games ever created. It’s also one of the most popular: Subverse earned over $2.2 million on Kickstarter in April 2019, making it the most successful adult games Kickstarter in the site’s history, let alone one of the most popular video games ever crowdfunded. There’s a lot of interest—and money—riding on its success. And there’s also a lot of responsibility placed on Studio FOW to do the right thing for its fans, including behaving politically responsible.

According to Discord chat logs shared by Total War fans, Arch has also made bigoted “jokes” against Black people, Roma people, and Chinese people, along with the claim that “real fascism leads to a utopian state where every member is both spiritually and physically fulfilled.” Inviting Arch to exclusively preview Subverse was, for many fans, a way of implicitly condoning his far-right politics. The Subverse fandom quickly became divided.

Studio FOW responded two separate ways. First, Studio FOW’s community manager Fowchan wrote a post explaining Studio FOW was “not aware at the time that [Arch] had made racist and other controversial statements in the past,” which the team does not agree with. “Our personal beliefs and politics could not be further from his,” Fowchan wrote. “We are now and have always been an inclusive community, which is reflected in the rules of our Discord and the work of our moderation team.” The post, which has since been removed, was documented by right-wing YouTuber Romanian TVee, who defended Arch by claiming “very progressive people” do not “seem to like the pleasures of virtual flesh” nor “the virtual titty.”

But after facing right-wing backlash for Studio FOW’s original post, Fowchan published a second post arguing that Subverse is “a game for getting off on sex and not politics.” The apolitical route, Fowchan argued, is best for everyone, as Studio FOW does not “want to offend any fans of Arch,” and the company loves “all of [its] fans regardless of political affiliation.”

“In terms of the previous statement regarding Arch, we were bombarded suddenly with posts from different political groups, and as a result we acted in haste. After all, we are only titty software developers but suddenly we found ourselves in a political debate,” Fowchan wrote. “We would like to make it absolutely clear, we have no problems with Arch personally. […] We appreciate his time and want to say we are sorry for jumping into a politically charged situation so quickly. Subverse has no political affiliation, it’s a game to be enjoyed by everyone.”

But Studio FOW’s reasoning is flawed. There’s no such thing as a lack of “political affiliation” in art because art, by nature, is political. It represents human emotions, feelings, and thought, which is influenced by our sociocultural surroundings. To choose political neutrality is to align with the status quo, one that is particularly influenced by misogyny, racism, homophobia, and transphobia, among other forms of bigotry.

There’s no better example of this than the games community. In an interview on misogyny in games for Polygon, feminist Soraya Chemaly argues that an entire generation of gamers came of age in “a period of real conservative backlash” during the ’90s and 2000s, one that has influenced the gaming community’s contemporary political values.

“We saw a whitelash against racial change, and an anti-feminist backlash against women’s liberation and sexual revolution. You can’t separate the culture that this whole generation grew up with from their attitudes, especially when you add in media like gaming and mass marketing that leverage stereotypes over and over again,” Chemaly told Polygon. “Sexism doesn’t happen in a vacuum; neither does feminism. Growing up in a backlash culture is going to impact the way people think about these things.”

Writing for The Outline, Josh Tucker similarly identifies how the games industry is not just political but innately conservative. Major, multi-million dollar game companies (or the AAA games industry) have not just successfully suppressed labor power in games; its management is “both tremendously risk-averse and brutally neoliberal,” Tucker writes. In order to maintain profit, games rely on “a vast, heterogeneous player base to pay off their massive investment but are more intent than ever on accommodating their zealous orthodox wing.”

When developers avow they are “apolitical” or “politically neutral,” they’re trying to cater to that “zealous orthodox wing.” Any expression of left-leaning politics is antagonistic to the status quo—and thus sales from gamer boys.

For many, it’s easy to write off the Subverse-Arch Warhammer controversy as “drama.” But over the past decade, we’ve seen how niche subcultures are incubators for far-right radicalization. Many contemporary far-right personalities built their platforms rallying around Gamergate. MAGA fan-favorite Mike Cernovich, alt-right social media darling Ian Miles Cheong, right-wing geekdom YouTuber The Quartering, far-right YouTuber Sargon of Akkad, and right-wing trans writer Sophia Narwitz all gained recognition and support after advocating for the far-right movement, and have since gone off to fight other culture wars.

This wasn’t a coincidence but a strategy. In his book Antifa: The Anti-Fascist Handbook, anti-fascist historian Mark Bray identifies how the alt-right infiltrates “alternative” subcultures and communities in order to bolster its ranks. The alt-right does this by targeting “frustrated racist white people” and their sociocultural anxieties and bigotries, radicalizing them into a base that can both claim these subcultures as their own and feed into a larger alt-right community.

“Fascists and white nationalists have pursued this line of recruitment by infiltrating white majority subcultures such as the skinhead scene, punk more broadly, metal, neo-folk, goth, video games, and fantasy genre communities (evident in Gamergate), hipster culture (Nazi hipsters known as ‘Nipsters’), and even furries and bronies (men who are fans of My Little Pony),” Bray writes. “This tendency shows the importance of anti-fascism in subcultural contexts.”

Whether Studio FOW likes it or not, the game development studio is an industry leader now. By ignoring the ways politics affect its game and its community, Studio FOW obfuscates how politics innately inform the art we consume and enjoy. It gives fodder to people like Arch who only feel emboldened after seeing Studio FOW back down. And by treating “no political affiliation” as a real political affiliation, Studio FOW does a disservice to the marginalized fans and adult creators who are working outside of the status quo and trying to create a more inclusive adult games community for all bodies, not just ones that look like Arch.