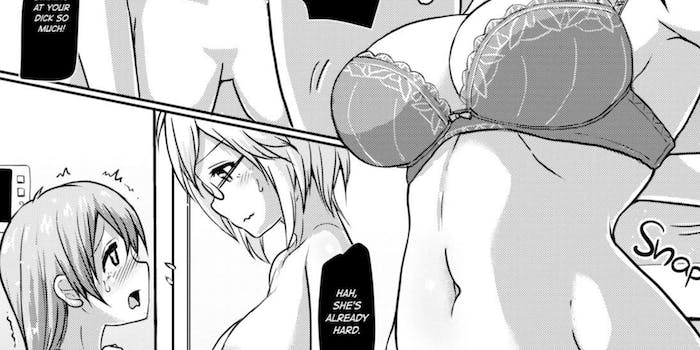 At first blush, American readers may think futanari is a metaphor for trans bodies, but Japanese culture critic Haru Nicol warns this isn’t necessarily how the genre is perceived in Japan.

“[Futanari is] never really trans-coded, it’s always seemed to me as like, ‘here’s a hot girl with a dick,'” Nicol told the Daily Dot. “Personally, I’ve always seen futa as SUPER fetishistic, similar to the idea of ‘traps.’ So it doesn’t carry the trans-coding for me because of the straight, cis, male artists’ intent. Though I’d love to see more trans-coded futa!”

“There is a more specific term for trans (usually women) people which is ‘newhalf,'” they explained. “Newhalf and futanari are like two separate ideas if you get what I mean.”

Emma Kidwell, a Japanese-American games journalist who regularly writes about Western culture and Japan, stresses Americans tend to assume out of ignorance and stereotypes that futanari is “the norm” in Japan.

“I’d say it’s popular because it’s taboo in both America and Japan—the latter still having archaic views on sexuality and gender expression (although that’s changing with the youth!)” Kidwell told the Daily Dot.

Again, in both cases, this doesn’t necessarily mean these viewers appreciate or respect trans women and their bodies. Nicol points out how futanari, especially as it’s perceived in the West, can be “deeply fetishistic and gross.”

“It propagates an ideal of cis passing and how being trans is a sexual thing. Plus it’s trap adjacent a lot of the time so there is all that,” they said. “I feel like futa is different from a genuine work of pornography from a trans woman since like, futa is so much more for the cis male gaze.”

“My ideal high femme domme is literally the Master from The Invitation by InCase,” this reporter once tweeted. “When I die and become a demon goddess, this is how I’m gonna be.”

But if we want to understand futanari’s trans-coded elements in the West, we also have to accept that futa means different things to different people. It can be an invitation to think deeper on who we are and how gender, culture, nationality, sexual desires, or a lack thereof shape the content we consume.

“Futa didn’t make me a dyke-y trans girl. It just helped me realize that’s who I wanted to be,” Riedel says. “Hopefully, it will help other fledgling dickgirls realize it sooner than I did.”