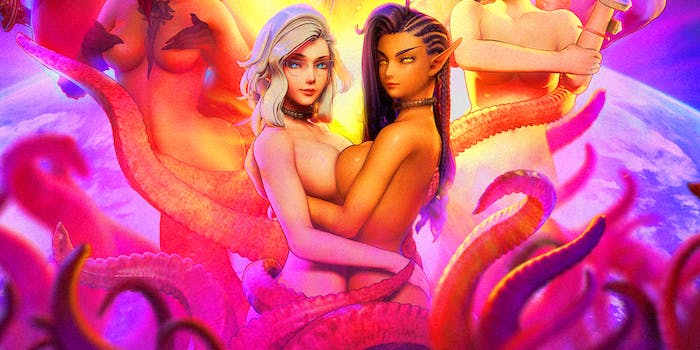 It's the third 'apology' from the studio.

Studio FOW’s upcoming adult game Subverse was embroiled in controversy last weekend after the studio partnered with a far-right YouTuber for an exclusive gameplay preview. Initial backlash was confined to the Subverse fandom. But after the studio published another public statement on Kickstarter, backers across the political spectrum threatened to pull their support from Subverse.

On Tuesday, Studio FOW CTO Tibor published a post on the Subverse Kickstarter entitled “Public Apology,” which was also emailed to the game’s 58,730 backers. In the post, Tibor explains his role as Studio FOW’s software and financial lead and how he is “just a regular old software guy who sailed into some very uncharted waters.” He also takes “full personal responsibility” for “the incompetency” from “multiple mistakes with communication,” he writes in the post.

However, throughout the apology, Tibor does not address the core issue behind the Subverse controversy: The studio provided an exclusive gameplay preview to Arch, a far-right YouTuber known for racist and fascist political beliefs. Instead of directly addressing this, Tibor argues “the devs did nothing wrong” and promises to “promote the game by letting the team do what they do best—animate awesome videos and trailers.”

“Instead of leading the team with competency, I let conflicting messages, posts and statements appear on our communication channels,” Tibor writes. “I let the backers down, I let our amazing Discord moderating team down by putting them into an impossible situation, and I let our fans down. This is a game to be enjoyed by everyone, and the last thing I wanted to do was create division within the fanbase.”

Responses were torn, and by 10am CT Wednesday morning, over 320 backer comments were posted. Some supporters expressed appreciation for Studio FOW and Subverse and considered the controversy overblown: As one “superbacker” named Renusek argued, “there is too much drama.” Others were generally permissive of Arch’s political beliefs and Studio FOW’s involvement with the YouTuber. One superbacker, Nick, called Arch “an awesome guy” and said Tibor should not “give into the whining minority who aren’t even going to play the game anyway.”

But in several posts, Kickstarter backers said they would be seeking refunds or hinted Studio FOW would lose support over the way the controversy was handled. One backer, Tyler, labeled Studio FOW’s critics “Marxist or SJW idealogues [sic]” and suggested he may soon want his money back. Another, Mark, said he pledged funds to Subverse “because it sounded like a big FU to cancel culture and [social justice warriors]. “Don’t you dare cave or let us down,” he warned.

But the majority of backers requesting refunds were disturbed by Arch’s politics, arguing Studio FOW was enabling his beliefs by refusing to distance itself from the far-right YouTuber. “I want my money back. Arch is a literal Nazi and I don’t give a shit if you worked with them for no money, you gave publicity to A FUCKING NAZI,” one backer, Thoru, wrote. “The fact that you don’t condemn those views is insane. Please let me know how the fuck i can get a refund.”

Some Subverse supporters weren’t ready to request a refund but were extremely disappointed in Studio FOW’s response and the community’s behavior. Backer T.J. Brumfield expressed shock at the Subverse fandom, arguing “100% of the comments here seem to be supporting a racist” or “saying the people opposed to racism are bad.”

“FOW is apologizing for working with a racist,” Brumfield commented. “I don’t blame FOW. But really I want nothing to do with this fanbase. I literally won’t be redeeming my key, playing this or interacting with FOW fans, nor buying anything in the future.”

The Subverse controversy has reached the larger gaming community, in part due to coverage from PC Gamer, GamesIndustry.biz, Kotaku, and the Daily Dot’s analysis of the situation. After one redditor posted Tuesday’s Kickstarter update on r/games, subreddit users were generally critical of Studio FOW’s stance. One redditor called Tibor’s post a “masterwork of a corporate apology” that avoided denouncing a racist. Another redditor, who says they backed Subverse, said they too “want nothing to do with this company or their fans.”

It’s unclear how Subverse and Studio FOW’s handle on the controversy will affect the game’s sales in the long-term. However, Studio FOW has a complicated reputation that may return forefront with the Subverse fandom’s bigotry. One Studio FOW movie, Bioshag: Trinity, features a group of Black revolutionaries sexually assaulting Bioshock Infinite character Elizabeth Comstock, a white woman. The scene emphasizes this racist dynamic throughout; in one scene, Comstock’s shadow is draped against a civil rights poster as she’s forcibly undressed.

“After sex scenes, the women gush semen or vomit semen endlessly, from just about every orifice at once,” Hernandez writes. “In one particularly gruesome scene in Kunoichi, a giant demon penetrates [Dead or Alive character] Kasumi so deeply that every thrust by the demon lifts Kasumi’s ribcage up. Kasumi screams in pain—the demon is tearing her up inside.”

For some skeptical fans, Subverse’s relationship with Arch may be a sign that Studio FOW’s early days aren’t behind it.

“The sad thing is: I have asked for a refund months ago, because of other things that StudioFOW has done in the past and did not sit well with me, but these were much smaller than this,” one Kickstarter backer, henriquebecker, wrote, “and then this happens, and I know that if I try to get a refund again they will never answer me; I have to just get a better look to who I am financing in the future.”

The Daily Dot reached out to Studio FOW for comment.