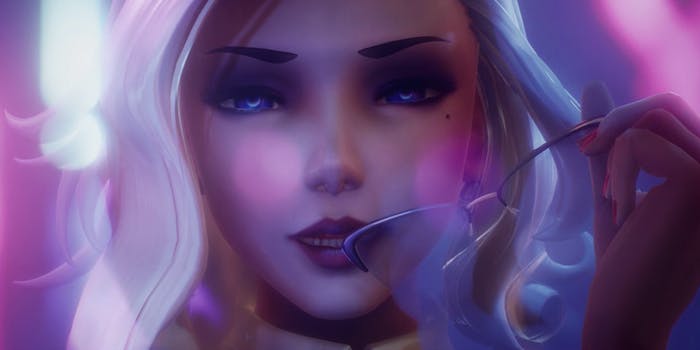 Everything you need to know about Subverse, the hottest adult game yet

Studio FOW’s Subverse is easily the most anticipated adult video game of the past several years. Whether or not you’re a gamer, this is one NSFW title you don’t want to miss—and in fact, it may be in your hands very soon.

Subverse is a crowdfunded, tactical role-playing game that aims to answer humanity’s most crucial questions: “Are we alone in this universe? What is out there? More importantly… can we bone it?”

Players explore the Prodigium Galaxy along with the “sexiest and deadliest waifus you can recruit.” The aim of the game is to stage a revolution seeking to overthrow a “bunch of puritanical, oppressive douchebags who pretty much hate anything sexy.” It promises thrilling, shoot-’em-up sequences alongside tactical, turn-based combat—with the perk of bangable teammates. What more could you want?

Exploration and adventure are heavy themes in Subverse‘s gameplay. You’ll eventually be able to explore five sectors in the Prodigium Galaxy, complete with dozens of scenarios. Some missions will call for straightforward violence, while others will urge a more subtle, stealthy approach. You’ll have the option to engage in grid combat or space combat with a classic shoot-’em-up feel.

Each of your buxom crew mates comes with a myriad of character-specific skills and combat abilities. Use them, along with your legion of lab-grown creations, to brawl with the armies of enemy factions in strategic land battles.

Afterwards, players can head over to their Captain’s Quarters and visit PANDORA, a “coin-operated fap theater” with unlockable sex scenes. This lets players exchange their waifus’ experience points for everything from handjobs to tentacle sex.

Unlike many video games, Subverse doesn’t have a single release date. The game is set to be released in chapters. Subverse’s first six chapters will release on March 26.

The initial release will include your first three waifus—Demi, Lily, and Killi—along with tutorial and introduction levels. Several recruitment missions boost the amount of playable material, with developers promising a “pretty damn big” game overall. Once all is said and done, expect more than 30 hours of gameplay.

As for when we can expect the next release, Studio FOW has been vague. An update on its Kickstarter notes that a precise timeline is difficult to nail down due to the different features each new chapter contains. The developer plans to “set a reasonable pace with our first update and increase it as we start to hire additional programmers and animators.”

Subverse will cost $29.99 during early access. The game will remain at $29.99 until version 1.0 launches, after which it will cost $39.99. Note that this price is for new customers only: All Subverse Kickstarter backers will receive an early access key, even if they pledged at the lowest tier.

If you aren’t among the 58,730 Kickstarter backers who have already secured a copy of Subverse, don’t fret. There is still an easy avenue to fondle a waifu or two for anyone a little late to the game.

The game will be available through the Steam store, which makes it as easy as downloading the Steam app on your computer. If you don’t already have an account, you’ll need to make one and sign in, as the game’s adult content makes it harder to flippantly view. With an account, you’ll be able to access the game’s page, where you can purchase a copy of the game upon release. Add the game to your Wish List to get a notification the moment it’s available to buy.

Studio FOW has been teasing an early access release of Subverse since early 2019, but a slew of roadblocks—including COVID—slowed these efforts. Finally, we have a release date for March 26.

To get in on early access, head over to Steam. Early access means that a game is not entirely complete, but enough of it is playable to allow for a solid gameplay experience. Sometimes, as with Subverse, you’ll be getting a mostly completed game, just in smaller chunks. In other cases, you’ll get a full game but with potentially game-breaking issues.

If you’re hoping to get early access for Subverse, head over to Steam and add it to your Wish List. You’ll get a notification once the game is available for early access, and you can make your purchase and start playing!

How to get later installments of Subverse

The initial release of Subverse will not include all chapters of the game. Studio FOW updates indicate that the overall size of the game is far larger than initially expected, which is great news for players. When development started, developers were aiming to create 10 chapters total. As of their last update, there are now 22 chapters in the main storyline, not including devotion quests.

The first portion of Subverse is expected to include the first six chapters. If future portions include a similar number of chapters, we can expect at least four future episodic releases. If you follow the game on the Steam store, you’ll get updates on any changes. You can also add the game to your Wish List, which will notify you as each new release becomes available.

While hordes of fans anxiously awaited Subverse‘s release, Studio FOW was embroiled in two big controversies. The company has faced criticism for depictions of sexual assault and racist overtones in past releases. During development of Subverse, the studio chose to partner with a far-right YouTuber with a reputation for racism. Its subsequent bungling of the fallout this move triggered nearly cost it backers, but the studio seems to have come out the other side mostly unscathed. Here’s the breakdown of controversy surrounding Studio FOW and Subverse.

In late November 2020, Studio FOW announced its partnership with controversial Warhammer YouTuber Arch. Arch has a well-documented history of spouting racist, fascist, and generally bigoted vitriol. He once railed againstTotal War developer Creative Assembly for supporting the Black Lives Matter movement. A Reddit post from u/AxiosXiphos exposed “genuinely sickening” racist and transphobic comments he made on Discord between 2019 and 2020.

When Studio FOW announced that Arch would receive an exclusive review copy of Subverse, some fans saw it as implicit approval of his previously touted opinions. The decision sent shockwaves through the fandom, dividing many between supporting the studio’s move and condemning it. The resulting backlash, particularly from backers, resulted in a less-than-impressive apology from the studio’s chief technology officer.

Studio FOW’s apology—or “non-apology,” as some fans labeled it—sparked a controversy of its own. It started with an attempt from the studio to distance itself from Arch. Soon following this, FOW seemed to contradict itself, releasing anotherstatement urging fans to “keep Subverse as a game for getting off on sex and not politics,” and pulling back on its criticism of Arch.

A few days later, the studio’s chief technology officer, Tibor, issued an apology for the “incompetency.” He apologized for letting fans down and stressed that the developers held no responsibility, all while skirting around the reason behind the controversy. Between the partnership with Arch, the studio’s murky response, and the toxic underbelly of the fandom the situation exposed, many fans lost enthusiasm for the game. Some even requested refunds.

Despite the backlash, Studio FOW came out of both controversies relatively unscathed. Subverse is the 12th most-wishlisted game on Steam, and many fans likely won’t give a second thought to Arch or FOW’s politics when the game finally goes live.

Editor’s note: This story is regularly updated for relevance.