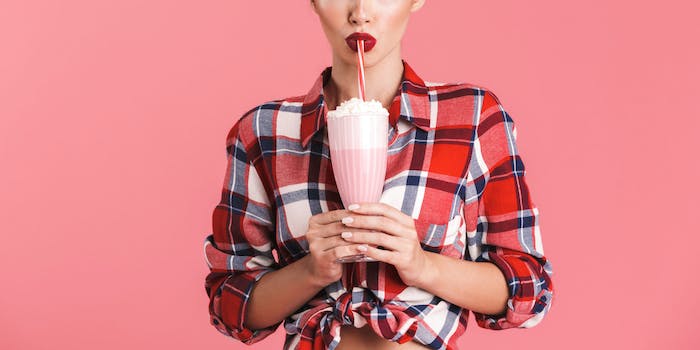 An iconic adult film ahead of its time: Andy Warhol’s Blue Movie

Blue Movie was equally controversial for its time; Warholstars notes the NYPD seized Blue Movie on obscenity grounds shortly after its release. In response, Warhol released a Blue Movie book featuring stills from the film and a transcript of the movie’s dialogue.

“I don’t think that Blue Movie will have an adverse effect on any normal, coping, neurotic adult,” the New York Times wrote of the film in 1969, “but then I don’t think it will enrich one’s consciousness, except at the chaotic speed with which our public morality is changing, and of the Warhol continuum, a life style and a body of work that are as indigenously American as commercial television.”

Unfortunately, Blue Movie is difficult to track down online, although the film is occasionally screened offline; the Whitney, for example, showed Blue Movie in 2015. The only widespread release available is a German dub, which has occasionally made its way on to tube sites.

The film, which revolves around the New York gay hotspot Fire Island, features three different queer encounters, from beach head to poolside hookups. Nearly 50 years later, the early ’70s classic holds up well thanks to its gorgeously realistic performances and beautiful shots of men with the men they love, desire, and yearn to pleasure.

Unlike Blue Movie, Boys in the Sand is readily available for streaming via PinkLabel. Purchase the film, rent it, or watch it for free as part of a PinkLabel Plus subscription.

The best way to watch The Crash Pad by far is on PinkLabel, which is owned by the film’s creator, Pink and White Productions. Purchase the film or subscribe to PinkLabel Plus to catch the full 56-minute director’s cut.

In Debbie Does Dallas, Golden Age star Bambi Woods features as a high school cheerleader eager to make the trip to Dallas to try out for the Texas Cowgirls. Her and her fellow cheerleaders proceed to run around town earning money for the trip, hooking up with their bosses and friends in the process. The film itself was at the center of censorship and obscenity scandals; famously, several scenes were shot at Brooklyn College and the Pratt Institute without administrators’ knowledge.

Given its age, Debbie Does Dallas is a little harder to track down, but it’s not lost. The Internet Adult Film Database offers numerous sites where users can rent or purchase the full film, including digitally remastered rereleases.

What’s it like being a leatherdyke? Sadly, lesbian leather history remains muted in most mainstream queer discussions. Luckily, BloodSisters isn’t afraid to celebrate the leatherdyke commuinty in all its sadomasochistic glory, making it one of the most important adult documentaries in queer history.

“My absolute favorite part in the film gives me chills—the San Francisco leatherdykes rolled into Washington D.C. clad in leather and joined the march surrounded by the contingent from the National Organization for Women. They created a large enough gap in the march so that Tala Brandeis could wield her bullwhip that appears to be no shorter than twenty feet long (drools) on the back of a very willing bottom,” she writes. “This was public sex. This was sadomasochism. This was a political act of protest from a trans woman, leatherdyke sadist amongst a marching sea of feminists who had already decided that they weren’t fighting for her rights because she didn’t deserve rights.”

Part adult film, and part oral history, BloodSisters is a necessary look at one of the most important (and disdained) subcultures within the lesbian community. Watch it on PinkLabel. Interested viewers can purchase the film, rent it for 48 hours, or watch it for free by subscribing to PinkLabel Plus.

Japanese manga artist Toshio Maeda originally introduced tentacles into Urotsukidōji as a stand-in for phalluses due to Japanese censorship laws, as the Daily Dot reported in 2019. The series’ plot, which is admittedly more of an excuse for its graphic sex scenes than anything else, follows a demonic invasion onto Earth amid a search for the Chosen One that can unite man, demons, and man-beasts. More famously, Urotsukidōji combined fantastical horror with tentacle sex for both titilating stimulation and aggressive, bondage-esque penetrative sex for the women who found themselves preyed upon by the story’s otherworldly demons. The anime series itself features far more sadism than the original manga, earning its infamy among both anime fans and non-anime fans alike.

Urotsukidōji: Legend of the Overfiend made its debut in the West in 1993, but not without sizable edits, shock, and criticism. “The feature cut may have a reputation for extreme content, but it actually removed about 30 minutes of scenes deemed too extreme for stateside audiences,” Jon Hogan writes for Hyperallergic. “A scene I encountered in my research, where a monster explodes his metal phallus into cheek-piercing spikes inside of a woman’s mouth, assured me that the feature film could indeed have been even more disturbing.”

Urotsukidōji: Legend of the Overfiend isn’t readily available on streaming sites. Many American distributions featured the edited cut. For anime fans who want to experience Urotsukidōji as it was seen by one-too-many American teens years ago, grab the edited version on Blu-Ray or DVD. Listings for the DVD version occasionally appear on Amazon as do the combined version at Walmart. Visit Blu-Ray.com for more information.

Urotsukidōji and its subsequent films are also available for purchase with edited material restored through the Urotsukidōji Perfect Collection; censorship is still somewhat present, granted, but for purists, this is the best way to watch the series. There’s one caveat though: this version remains rare, and thus very expensive. Purchasing the Perfect Collection off Amazon, for example, ranges from $298.99 to $569.99 as of February 2021. So while possible, expect to pay a pretty penny just to enjoy the series as intended.

Additionally, Fakku offers the original Urotsukidōji: Legend of the Overfiend manga in digital or physical editions.

Pirates is available to stream as a PPV flick on Hot Movies. The movie runs at a little over 2 hours.