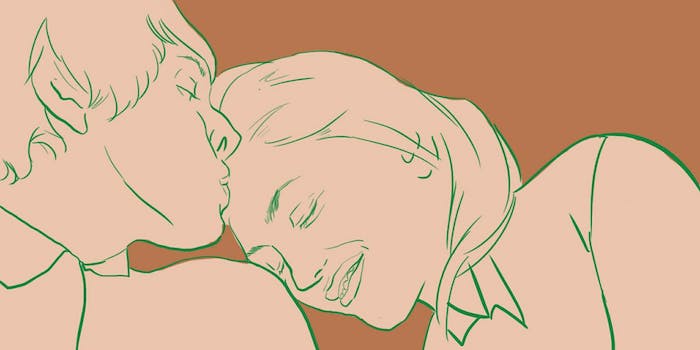 Study finds women like to be objectified—by a committed partner

But there's a catch

But according to a new study, women might like it if it’s their boyfriends doing the catcalling. New research published in Archives of Sexual Behavior studied how women in newlywed heterosexual couples enjoyed their partner sexualizing them. They found that women who perceived their partner as being more committed to the relationship were more satisfied when their partner valued their sexuality. Conversely, women who believe their partners to be less than committed were less pleased by their “sexual valuation,” in the study’s terms.

According to the researchers, this makes sense from an evolutionary perspective. The theory—which is no stranger to criticism—suggests that women crave long-term commitments in sexual relationships because they want the father around to help raise the kids. Having your committed partner think you’re sexy is a boost to self-esteem—it makes women feel like they’ve succeeded in locking down the ideal mate who will provide them with many babies and help them raise them, the researchers posit. Having your less-than-committed partner think you’re sexy is less appealing since there’s no guarantee that he’ll be there in nine months.

The criticism of this theory is that, while this thinking may have been relevant in cultures and civilizations of the past, it’s not as relevant today.

Many men and women are not having children. Women, like men, are interested in engaging in casual sex and non-committal relationships. Not all romantic relationships are sexual and not all committed sexual relationships are monogamous. Perhaps worst of all, the study didn’t bother to research same-sex couples.

In short, the way that young Americans are approaching relationships is shifting, and there may be limited value in studying them from the perspective of our earliest ancestors.

There’s also a major difference in what it’s like to be objectified by a stranger yelling obscenities from the street than what it’s like to have your life partner value your sexuality. The researchers said that their findings help explain why women go to such great lengths to boost their sex appeal through their physical appearance, but that also seems reductive. Of course women (and men) would go to lengths to appear more attractive to their partner, but that’s no huge revelation.

Women spend a lot of time on their appearance for many reasons. One reason might be meeting a standard of professionalism. According to one study (funded by Procter & Gamble, which owns Covergirl cosmetics), some light makeup makes women appear more likable and professional in the office.

Another mind-boggling reason that women might spend a lot of time on their appearance is they simply like doing it. While fashion and makeup trends certainly don’t exist in a cultural vacuum, there is something to be said by the simple pleasure of dressing oneself up in a way that is pleasing to that individual.

But at least now we have a scientific study to show that women in committed relationships like it if their partner thinks they’re sexy. Way to go, science.