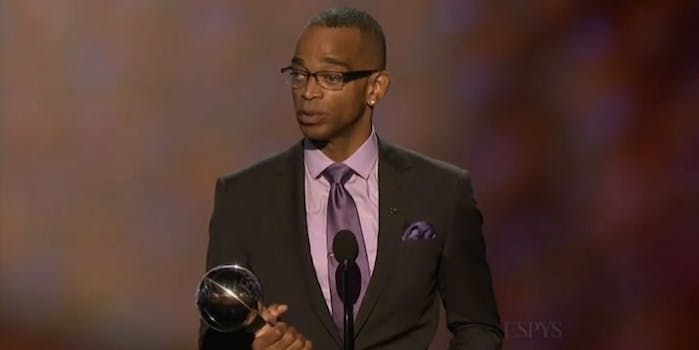 “When you die, it does not mean that you lose to cancer. You beat cancer by how you live, why you live, and in the manner in which you live.”

It was a familiar setting. There was the frail, accomplished legend at the podium receiving one of those post-everything aggregate awards, complete with standing ovation. Only Stuart Scott addressing the ESPYs Wednesday night after receiving the Jimmy V Perseverance Award looked very much like the rock of a network anchor who had just worked the NBA Finals and who moonwalks through Sportscenter every week. Thin maybe, but hardly sickly. His voice was as rich, direct, and stylish as ever. Here it turned toward the deeply painful and personal.

“When you die, it does not mean that you lose to cancer. You beat cancer by how you live, why you live, and in the manner in which you live.”

Over the last 10 days, Stuart says, he “crashed” with liver complications, kidney failure, four surgeries in a span of seven days, and “tubes and wires running in and out of every part of my body. … As of Sunday I didn’t even know if I’d make it here.”

The speech was preceded by a documentary about his day-to-day, treatment-laden life. Jack Bauer narrated the thing. “Stay With Me” plays—that hollow but aggressively performed-by-Sam Smith top 40 staple, opportunistic church choir and all. As a sports fan known to loop his telecasts while multitasking, you remember that the 48-year-old Scott had cancer at some point but you long-assumed that was no longer a thing.

The ESPYs had been about Drake jokes and Marshawn Lynch’s disdain for dressing up. Then about Michael Sam’s courage. But Scott, the ever-ready fixture, spoke like he was coming live via satellite from the afterlife. It knocked you backward.