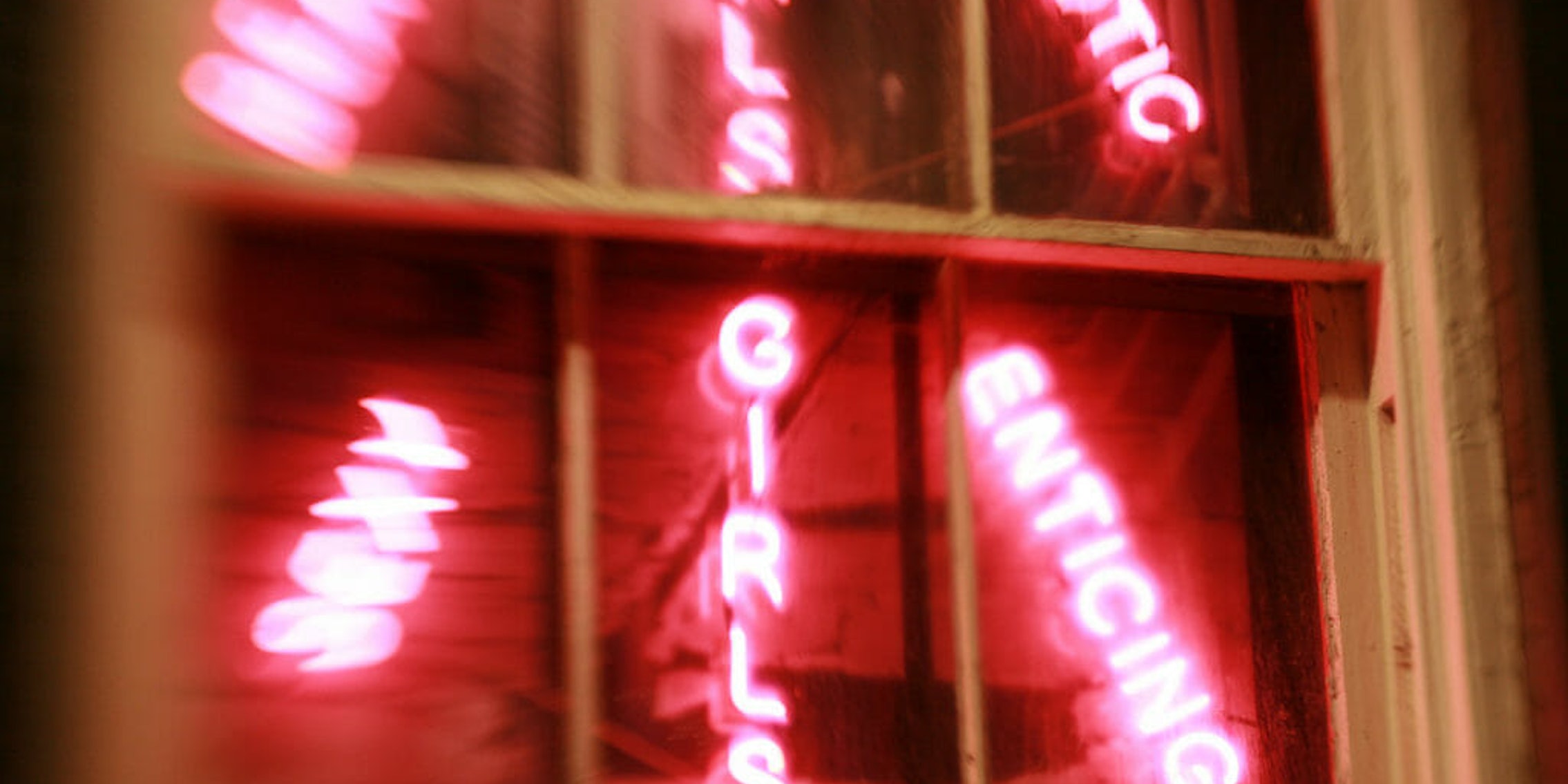 How the #NYCStripperStrike could lead to a nationwide movement

Organizers are sick of racist practices and their wages being undercut by 'startenders.'

Stripping is among America’s oldest professions—and racism is one of America’s oldest demons. So it’s not surprising that even going back to the era of shadowy burlesque shows, race has played a role in the politics of who gets time on the stage and who walks home with more cash.

Black and Latinx dancers are notoriously paid less and are often limited to working lower-paid and less-security intensive clubs than their white counterparts. Nowhere is this more readily apparent than in big cities like New York, where strip clubs are divided into so-called “upscale” clubs, which often favor light-skinned dancers and practice what many dancers see as unspoken race quotas, and “urban” ones.

Like so many things in the social media era, the power of garnering likes and comments has only heightened this inequality. Instagram’s design has led to a slew of women who find themselves with minor celebrity status as models, and these influencers, usually white or lighter-skinned Latinx, are being hired at strip clubs as so-called “startenders.” Unlike traditional bartenders, they aren’t hired for their prowess at making a cocktail. They are dressed similarly to strippers and will even dance to songs alongside strippers and collect a portion of their tips—and yet they don’t have to deal with the stigma and physical rigors that come with choosing “stripper” as a profession.

Strippers are fighting back, though. In the fall, entertainers at various gentleman’s clubs around New York City came together to launch the #NYCStripperStrike. The movement not only aims to address racial inequality in the industry, but is also set on highlighting sexual abuses and longstanding labor issues that are commonplace in strip clubs. This means strippers involved in the movement are promoting a boycott of some of New York’s biggest clubs, including Rick’s Cabaret, Hustler, Penthouse, New York Dolls, and HeadQuarters.

The #NYCStripperStrike also has a concrete long-term vision. They are working with the SOAR Institute, a sex-worker advocacy organization, on a strategy that could include organizing, class-action lawsuits, and, potentially, collective bargaining. Organizers from Women’s Strike USA are also working with the group.

Gizelle Marie, who founded the movement after experiencing these issues firsthand, has a vision of launching stripper strikes in other cities and building a national agenda. Some shorter-term legislative goals include a state mandate to eliminate the house fees clubs charge dancers and a crackdown on race quotas. Gizelle told Jezebel that some upscale clubs only employ 10 black dancers out of 150 women working at a club.

While startenders are often found in major metropolises where these influencers tend to live, the underlying issues of racial and economic inequality exist throughout the country, where strippers have long been fighting for stronger worker protections. In 2014, the Nevada Supreme Court ruled that strippers in the state must be paid a minimum wage. After a four-year battle, dancers in Maryland also were successful in getting fair wages and freedom from being classified as independent contractors. Similar lawsuits are ongoing in Key West, Florida, and Richmond, Virginia.

For strippers, and many skilled workers, independent contractor status has long been an issue of contention. While the legal classification was intended for self-employed individuals who sell their labor to various employers and enjoy minimal oversight (for example, freelance writers like myself), the designation is being continually abused. Many bosses classify their employees as independent contractors rather than employees to push various costs off of themselves and onto the worker.

In stripping, this allows clubs to charge a “house fee,” sometimes over $100 per night, for use of its stage, even if that dancer only works at that club. This also means their income is often almost entirely tips. A startender is also an independent contractor and is also betting on their body to generate tips, which means they are in direct competition with strippers.

And yet dancers receive none of the benefits of independent contracting, as they given a fixed schedule and are expected to follow extensive “house rules.” Once you take into account the house fee and fines for violating house rules (such as failing to work a full seven-hour shift), some strippers leave work owing money. Women of color receive even fewer benefits, because the freedom to move from club to club is meaningless if other clubs in town only hire white women.

Independent contractors are also limited in seeking redress for workplace issues—and strippers confront a lot of workplace issues. One former strip club organizer ticked off a list for HuffPo, including: “crude discriminatory policies, the totally arbitrary house fees or stage fees that grow and grow, enforcing a five- to eight-hour shifts, policing how we are touched and where, body-shaming, fat-shaming, clubs stealing 60 percent of the cost of private dances, mysterious fines and fees for lateness that cost up to several hundred dollars, misclassifying strippers as independent contractors.”

Exactly what the long-term gains could look like for strippers if the strike goes national, and how much pushback they’ll get from management, customers, or even local government, remains to be seen. Strip clubs have a mixed record when it comes to organizing. The Lusty Lady, a San Francisco strip club, organized under a local union in the mid-nineties. Though the club closed in 2013, for over a decade, the club was not only organized, it was also worker-owned.

However, other attempts have been less successful. In 2002, Las Vegas strippers formed the Las Vegas Dancers Alliance. While the group was able to bring an end to a number of unfair labor practices, including mandatory tips to various club personnel, the organization collapsed—some say due to intimidation—by 2003. The organization reportedly found themselves targets of law enforcement and local government during their brief existence.

As with other organizing efforts in various industries, success in more liberal, hyperconnected cities may not be immediately scalable to smaller markets. New York state also boasts the highest union density in America, at 24 percent. Even if the short-term goal isn’t unionizing, this means you have a customer base familiar with and supportive of workers’ rights. Other states that have flirted with organizing dancers, California and Nevada, are also in the top 10 when it comes to the percentage of the population in a union. Las Vegas’ powerful Culinary Union is one of the strongest in the U.S.

The question remains to be seen if states like Alabama or Montana could employ similar tactics successfully. But, of course, they will never know unless they try. As we’ve seen with Me Too, when you have the support of a national movement, anything is possible.