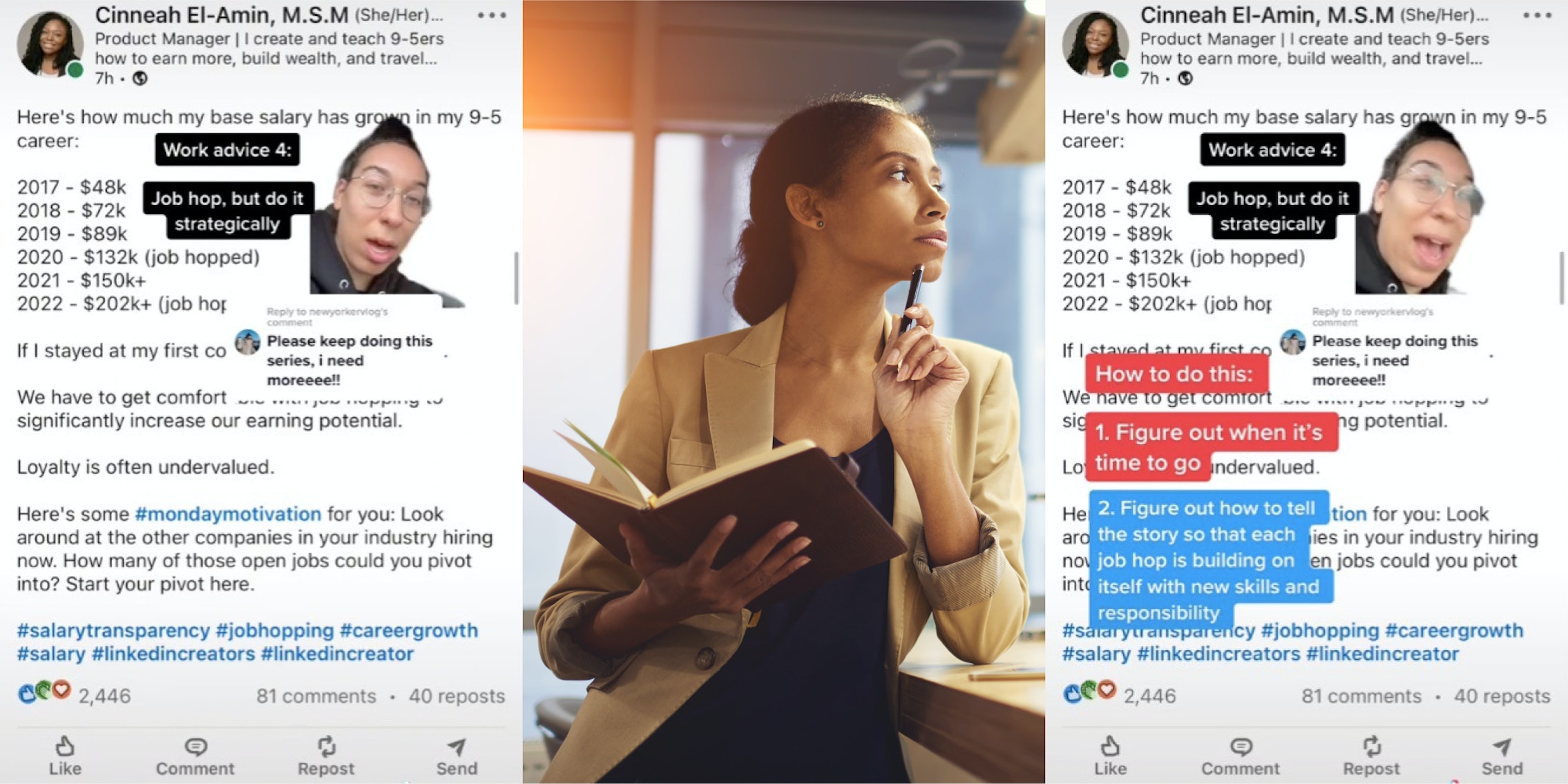 ‘Not just important but necessary’: Content creator says job hopping is the best way to raise your salary, sparking debate

'I’ve done this and wouldn’t change it for the world.'

Career consultant and TikToker Miriam (@miriam_tinny) recently went viral for discussing a career mobility “hack” that has the potential to yield higher salary increases for employees in a shorter amount of time: job hopping.

She specified that there’s a sweet science to strategic “job hopping” and that workers need to be able to know the right time to leave a company. This includes treading the line between seeking greener pastures while still looking like they aren’t a flight risk for a company. She posted an example of a successful job hopper who managed to go from earning $48k a year in 2017 to $202k a year in 2022 by utilizing two well-timed job hops.

In the clip, Mirian draws attention to the green-screen image grab from a user’s LinkedIn post.

“This creator, Cinneah, I really really love her stuff it’s all about optimizing your 9-5 career and she talks a lot about how her job-hopping gave her exponential salary growth,” Miriam shares. “And you can see here the first time she hopped, 40k increase, the second time, $50k. When is a good time to do this? To what end are we job hopping? How do you actually do it and not look like you’re flighty?”

Miriam shares three tips for how to do this. The first tip is knowing when to leave.

Miriam then discussed how to best gauge when the best time to job hop is, including asking yourself questions like whether you’re being challenged, how do you feel after getting off work, and whether the workplace is toxic.

She continued, “The second thing about job hopping is how to tell that story because you want to make sure that in the resume, in the cover letter, in the interviews you are showing that these job hops were not just important but were necessary for you.”

Miriam then suggests justifying these job hops to new employers by making it clear you have upscaled, like having gained new skills, roles, or more responsibility.

Throngs of different TikTokers were curious about the act of job hopping. Some wanted to know if leaving for an opportunity to learn a new skill set, but not necessarily more pay would be a prudent job-hopping maneuver.

“How do you do that when your industry has a ceiling and you don’t want to get into management,” a user asked.

“I did job hob without knowing what it was in my early career but that lead me to earn more than double what I [email protected] first job in less than 4 years,” another shared.

“Exactly! STRATEGICALLY! Not every 6 months! I make it a point to not even consider a promotion after 2 years cause i’ll be out the door by then,” one user stated.

“I agree with this wholeheartedly,” a user commented. “Your leaving money on the table if you stay somewhere longer than 2 years.”

Others were shocked at the amount of money Cinneah ended up earning in 2022, while some said that job hopping was the best thing they’ve ever done for their career and that they never plan on staying at a job for longer than 2 years. However, others wanted to know just how in the world folks who job hopped every year managed to get themselves references for when they applied to new positions.

“Question. Who are ppl using as references if you’re leaving at a year?? The previous employer?” another viewer asked.

“She left every year… how did companies not get bothered? I stayed with two companies for 2 years and I got asked why I was job hopping,” someone said.

One user wrote, “I accidentally did this by leveraging my network and past experience with 3-6 month stints at work.”

The Daily Dot has reached out to Miriam via TikTok comment for further information.