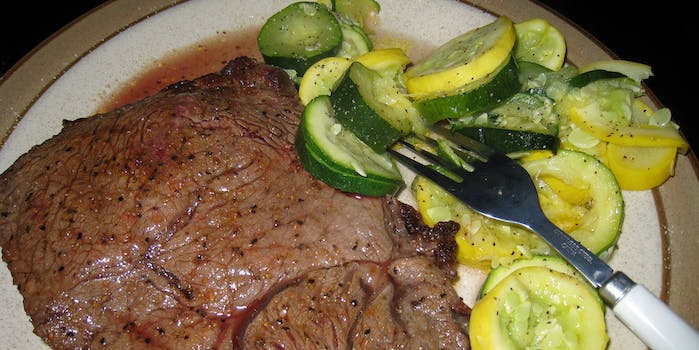 Today is chauvinists’ favorite holiday: Steak and a BJ Day

For the Daniel Tosh–loving, angry white male in your life!

While everyone else is pigging out on rhubarb in celebration of Pi Day, today the Daniel Tosh–loving, Natty Light–swilling, MRA-dogma-spouting misogynist in your life will be celebrating a different kind of holiday altogether: Steak and a BJ Day.

Conceived as an antidote to Valentine’s Day and referred to by the Jane Dough as the “White History Month of holidays,” Steak and a BJ Day is exactly what it sounds like: a clarion call for the straight women of America—though an Urban Dictionary entry magnanimously extends it to gay men as well—to “reward” their male partners for their “hard work” on Valentine’s Day.

How? By feeding them slabs of charred meat and sucking their penises to climax, preferably at the same time.

Here, let the “official” Steak and a BJ Day website tell you more:

Every 14th of February men get the chance to display their fondness for a significant other by showering them with gifts, flowers, dinner, and many other romantic baubles. They rack their brains for that one special gift that will show their spouse that they truly care.

Isn’t that touching, ladies? We owe teh menz so much! It’s enough to make you wanna run out of the office, hail a cab, and enthusiastically bob on the genitals of every male you see.

To all the girls complaining about guys talking about #SteakandBJDay get over it…and get on your knees while you’re at it. #Boom

One hour left of #SteakandBJDay BROs. Make sure you collect. http://t.co/MqDtGjfB6w

In case you ladies were unaware, I like my steak medium/well and my bjs sloppy 😏 #steakandbjday pic.twitter.com/7dInKi6rMp

Uh… thanks, guy. We’ll keep that in mind.